Somebody's Getting A "New" Studio!

But soon the studio itself will no longer be bizarrely attired. Since I can't get in the studio until next summer anyway, I asked my husband if he would rip out all the carpet for me. And that's exactly what he did. And now he's spent the last two and a half weeks ripping out carpet, insulation, windows, and glue, and updating wiring. He started the entire project last year, when he ripped the carpet off the main door. He restored the second door in the spring, and the last one was done over the summer. 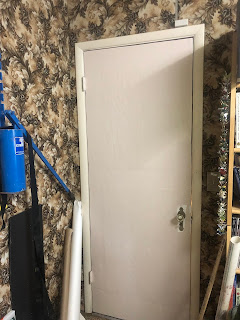 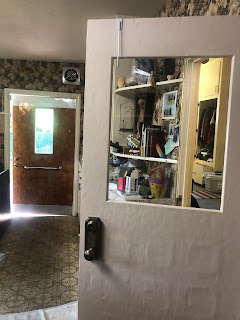 Two of the studio doors after the carpet had been removed this summer.

The first big task was to empty the space. I usually have a lot of tools, work, pieces in progress, clay, packing materials and just "stuff" in that space. The space is both where I make work and where I store work related stuff. When I first moved into the room (in 2007) I used my art fair booth furniture as the studio furniture. Since then I've added a wheel, stool, and wedging table, but I've mostly kept the portable art fair furniture and the furniture that came with the room.

Under the tables and on top of the shelves I've stored boxes, bubble wrap, etc for packing and shipping work. Since ceramics generally needs to be double boxed for shipping, I've been reluctant to get rid of any boxes, though my husband thinks this is ridiculous. As I've made more and more work, I've stored some of it in the house and some in the studio. Generally, though, the studio stuff is mostly work in progress, something I want to fix or change, or something I want to remind myself of next time I'm working in the studio.

Over the years, my daughter has taken over more space in the room, too. A low pedestal is basically her work space and she has annexed progressively larger storage spaces in my room for paint, clay projects, and other "art" stuff. In summer the room also tends to collect balls, frisbees, jump ropes and water toys. In the fall it collects leaves, mostly, but in the winter it collects a variety of detritus, including sculpture back from shows that I don't want to put away because it is too cold in the studio.

Once my husband indicated he really would take on this project, I moved most of the ceramic objects out of the room on my own. I spent a few hours on a Wednesday evening moving stuff, then took a break. I was very surprised, when I came home from work the next day, to find that Sean has moved nearly all the rest of the stuff out of the studio himself. All those bookshelves and books and chairs and clay and tools and sculptures in progress and other stuff is currently jam packed into a couple of basement rooms and cupboard spaces, and other nooks and crannies around the stairway and downstairs. He did decided unilaterally that I didn't need all the boxes and packing materials.

The tables, pedestals, wedging table, and some shelves are now in the trailer (our portable storage shed), or stacked in the back patio. The large beast of a rolling cupboard/cabinet/countertop thing has found a new home in someone else's life. It was useful in that it was sturdy and had drawers and other storage space as well as an easy to clean countertop, but the entire thing was covered in carpet all the way around.

The things is on wheels, though it is so large I can't imagine rolling it around regularly. For a while I thought it was built-in, since the carpet and countertop match the wall and doors and the other built-in countertop. When we pulled it away from the wall, we discovered that even the whole back of this monster is carpeted. The carpeting wraps snugly around the top, bottom, and sides of each of the doors and drawers, evidencing the attention to detail, but strange taste of the previous owner.

The carpeting is snugly glued over all these surfaces. At first Sean was going to remove the carpet, but as soon as he realized how much work that would entail, we both agreed that it wasn't worth keeping. The thing is a tank, though, solid and quite heavy. It's a decent, if ugly, pieces of furniture. Someone bought it and hopefully whoever has it now appreciates its bizarre utility.

Basically every step of the process has unearthed more trouble, as, I think, home projects are wont to do. The carpet was glued snugly to both the walls and the cement floor, so the walls themselves had to be ripped out down to the framing. There had been some water damage from the roof years ago, so some of the insulation was moldy. Sean removed all the insulation and is working on the molded area. Both large windows had sealant that had leaked down the inside of the glass, so we removed the windows. The floor glue also had to be removed.

Sean spent two days grinding the glue off the floor last weekend. Unfortunately we didn't realized until he'd been going for a while that dust was coming into the house from under the door. By the time we realized, there was a fine layer of dust on every surface in the laundry room, basement hall, kitchen, and dining room and a bit in the living room. I rushed myself and my daughter out of the house, since we weren't wearing respirators, and the next day I washed the entire kitchen and dining room floor on my hands and knees because I didn't trust the vacuum (airborne dust) and the mop didn't clean well.

As strange as the two different carpets and the carpeted walls, etc was, this project isn't primarily about looks. Carpet isn't really recommended for a clay studio as the primary safety hazard is clay dust. Clay that ends up on the floor needs to be washed away or it ends up becoming airborne silica dust that can be inhaled and cause lung damage. The irony here is that in trying to make the clay studio safety, we temporarily made the house less safe.

The insulation guy is coming this week, but the wiring has proven to be more of a problem than Sean initially realized. It's another one of those jobs that starts as one thing and then grows and grows. The first thing was moving the outlets from floor level to a more accessible height and switching out old two prong outlets for grounded ones (and usb outlets). This was fairly straightforward and will make the space a lot nicer. It also made us realize how much we'd like more outlets in other parts of the house.

The next step was trying to update the porch light to a timer, something Sean been meaning to do. In doing so, he discovered some wiring that needed to be updated and decided to replace the odd low voltage wiring with regular wiring for that room. Overall, the end result is that things are safer and more reasonable in that room. The wiring is safer, the dust prevention will be better, and new windows and insulation will keep the space warmer in winter (maybe I'll actually put away work that comes back from a show).

We've ordered windows and flooring and are waiting for both to arrive. The room has been semi-open then, for quite a while while, other stuff is being worked on. The open windows are probably good news as far as ventilation goes, and we have what is essentially an exterior locking door between the house and the clay studio, so security isn't really an issue, but the recent cold weather has made it pretty chilly.  The cats, though, think it is great fun to jump through the windows right now.

We had been thinking of various options for the walls, but I think we're going to end up with painted drywall because it is relatively cheap and simple. Sean suggested that I needed to spend some time thinking about how I wanted to arrange things in the space. I didn't understand what he meant at first, other than that we had sold the carpeted cabinet monster. After he pointed out that my furniture in there was mostly designed to be easy to pack up from an art fair, I realized that, having not done an art fair in years, that's probably not the most important feature of my studio furniture anymore.

Over the next few weeks, as the room comes back together, I'll have to think about what I'd actually choose to have in the brand new space. I hadn't thought that way in quite a while. As of right now, the only things that have a guaranteed spot in the new space are my wheel and my wedging table and I've got a while before the space will be ready anyway.