Join me at Yakima Maker Space and The Seasons Performance Hall on Monday, April 24 for International Sculpture Day. 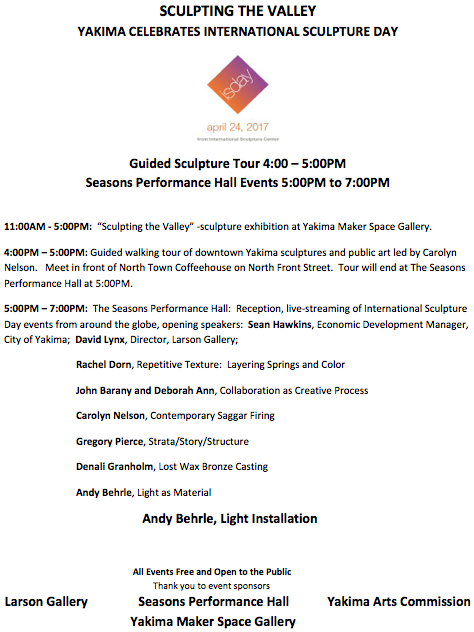 Last year, I learned that rules are apparently optional for artists, so this year, after the organizers created and printed their fliers for the event, I decided to change my title. So, join me at the Seasons at 5pm for my talk "Evolution of the Bulb." Where I talk about my wall installation at Yakima Maker Space, my sculpture, and my fascination with the "bulb" form that shows up in both.


Attendees at the International Sculpture Day events will get to see the early iterations of my sculptural and installation forms, including raku fired work from 2002 and the tactile sensation that was my wall installation in 2005 (it was so enticing, it had to be moved so that people would stop touching it). Also on view during my talk: the gradual improvement of my ability to operate a camera from 2002 to 2016.


My talk is only 10 minutes long, so be there or miss out on all the fun times. If you can swing it, join Carolyn Nelson for an exclusive walking tour of downtown Yakima sculpture and public art starting at North Town Coffeehouse at 4pm. The tour will end at The Seasons in time for the artist talks.
Posted by Rachel at 5:01 PM No comments:

This week I lost a friend and the studio lost a long time and influential member of our community. Janice Buckler passed away early this week.

Janice has been a fixture of the clay studio at YVC for years, since at least 2011. Recently she has been acting as a community member with studio responsibilities for firing kilns, among other things. For several years, informally at first, and this year in a more official capacity, she has helped beginning throwing students learn techniques and adjust their throwing. She alway has an impressive array of tools and because she has the time, in the studio, to throw large work, she's the go-to student for me when I want to show a more advanced student techniques for centering larger work, bracing one's body, and pulling up the walls of a form that is taller than 6 or 10 inches.

This quarter I was looking forward to working with Janice on number of projects, including redoing the insulation on the raku kiln--something I've been putting off, but Janice seemed interested in doing, experimenting with some low fire decals I brought back from NCECA, and making plans for how me might use a 3D clay printer in the studio. Even though I knew about her death, three times on Thursday I had to remind myself that she's gone. Only my way out of the house, I started to grab a new mug from NCECA to show to Janice, because we had talked about the artist in March. Reminding myself that she wouldn't be there, I started to grab the decals I bought so we could plan where they'd fit on some mugs we made last quarter. I reminded myself again that she as gone, and realized I'd be redoing the raku kiln without her help. And then I got in the car and immediately passed a painted mural of Scooby Doo, know I won't hear her ring tone in the studio again. 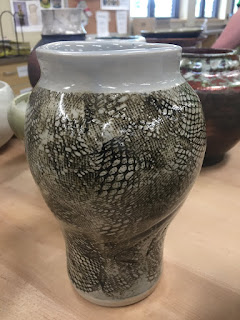 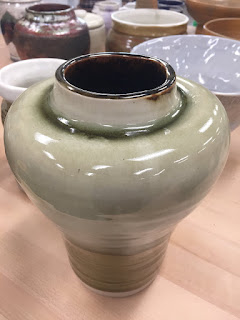 two of Janice's pots from this year

There are so many little things in the studio and in a teaching day that mark Janice's influence. Over and over again, as I talked to my throwing students, I started to make a suggestion, point out a tool or technique, or remind people to clean up after themselves. Over and over it was a jolt to me to remember that Janice wasn't there to share her tools, make a suggestion, demonstrate a technique, or be annoyed when students didn't clean up to her standards.

Her death was a shock to me, and most of the people in the studio. My plans this quarter included her and while I was at NCECA, I was thinking about things that she'd find interesting or entertaining or useful in her work. She had plans in the studio. She made some of her best work last quarter, but she had more to do. I thought I'd be joking around with Janice in the studio five years from now, and running into her at shows in Yakima in ten years.

I went looking for some pictures of Janice the other day because I wanted to post them on the YVC Clay Facebook page. I know Janice has worked with,  influenced, and even taught many students over the years and I think they'd like to know. Moreover, I'd like the studio to officially acknowledge her contribution and her loss. In looking for pictures, I discovered that while I have lots of pictures of Janice's pottery (and other students' pottery), I have far fewer pictures of people. I take pictures of the work because I can share it online and because the work tends to leave the studio more quickly than the students. However, it was surprising to realize that the face of someone I see every day barely shows up in my photos.

I didn't take pictures of her, in part because I didn't think she'd be leaving. And I didn't realize how much I had come to take her presence in the studio for granted. I wish I had paid more attention the last few times I saw her. I was talking to her last Thursday, the first day of class, and I was distracted with making sure my beginning students were on track. I remember that Janice was talking to me about a couple things, but I also remember thinking that I shouldn't let my attention be distracted from the class. And when the class was over, Janice was gone.

And then Janice was gone.

Posted by Rachel at 3:24 PM No comments: