This weekend I drove a car full of sculpture to Hood River, Oregon for a show that opens next week. The Beauty of Clay opens Friday, March 3 from 6-8pm at Columbia Center for the Arts and runs through April 2, 2017. This timing coincides with the NCECA clay conference in Portland. The internet tells me that Portland is just over an hour from Hood River, but its possible some people might stop on the way to or from the conference. I plan to.

The drive down to Hood River from Yakima is just over 2 hours and, though the road and weather were uneventful, my car chose to enliven the drive by falling out of fifth gear four or five times on the way down. For the last hour or so, I drove with my arm locked on the gearshift to keep it in gear. Fun times. Strangely, on the way back it didn't fall out of gear once.

I meant to take pictures of the car fully loaded or the work being packed or unpacked, but I guess I got distracted by the process of packing, and then by trying to diagnose the gearshift problem. I thought pictures of the loaded car might be interesting, because I drove down alone with six sculptures occupying three seats and the back cargo hold. My friend offered to accompany me, but I traded her seat for a sculpture.

If anybody in Hood River wants to buy these guys, I do not mind not bringing them home

I loaded the two tallest pieces in the back seat, after removing the car seats and detritus from my kid. (The problem with only kids occupying the back seat is that no one remembers to pick up wrappers and toys and kleenex in that space.) These two tall pieces are also the reason I wasn't able to take the juror, Yvonne Pepin-Wakefield, up on her offer to drive the work down (she has a studio in Tieton and a place in Hood River). I could have boxed up the other pieces for shipping, but these two pieces are tall, heavy and have lots of pointy bits at the top that are likely to break if not packed carefully. I'm sure, given enough time, money, and motivation, I could develop a safe box system for the tail ones, but it probably was cheaper in both time and money, and certainly in energy, to drive them down, loose packed, in my car.

Packing the tall sculptures in the car allows me to stand them up on the seat. I support the sculpture with foam between the metal frame and the car seat, and cushion every other area with foam, towels, or leave open space. Their weight and the seat belts keep them from moving around very much, but I certainly breathed easier going over potholes on the drive home.

The three smaller, less awkward sculptures were paced in the back cargo area in a large plastic bin with foam and beach towels. My main packing material for larger pieces that I hand-deliver is usually beach towels. They are extra large and thick, don't get used very often as towels, and we otherwise store them rolled up next to the clay studio, so they're ready to use for support or padding when I start to load the car (usually half an hour before I plan to leave).

The front seat was reserved for the bike wheel sculpture. This one doesn't need much support but it does need some space. It fits just about perfectly on the front seat with the hub of the wheel touching the seat back and almost touching the car door and dash, but not getting in the way of my shifting arm (or, in this case, my holding-the-shifter-in-fifth arm). 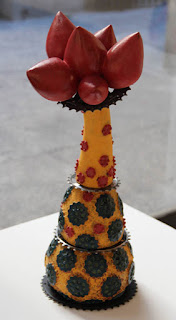 the two easiest sculptures to load

I could probably adjust things to make the wheel sculpture fit in the back of the car, but this sculpture rattles a bit as I drive. I find I am less stressed while driving if all rattling sounds are close enough that I can account for them. I drove with this sculpture or something similar in the cargo area a while back and spent the entire 20 minute drive asking my daughter what was breaking. In fact, perhaps the gearshift problem was a good thing because it distracted me from worries about ceramics in the car.
Posted by Rachel at 7:31 PM No comments:

This winter quarter I am teaching my annual hand-building class. Usually when I teach this class I begin with a coil-building project, but this quarter I decided to switch things up. I had the students begin by creating a solid portrait sculpture on an armature.

This process is one of the more challenging processes I have the students do, because they have to build the work, then cut it apart and hollow out the interior. In most cases, they build the sculpture on an armature, though some forms can be built completely solid. They shape the form, with the support of an armature, address some of the surface texture, then once the exterior has dried to a leather-hard stiffness, they can cut the work apart and remove the armature.

In advance of this quarter, I ordered a batch of armatures for the YVC studio, so that every student could have one for their project. The armatures are designed for heads of people (busts), but many students chose to make portraits of animals, and some chose to make forms that required quite a bit of variation from the armature structure.  The cat and turtle armatures, for example, were bent over at quite an angle to provide support for the curve while building. The cat also had a stick supporting its raised leg.

The end results for this first project were pretty fun. We had a range of animals including two dogs, a cat, a fish, two elephants, a frog, and owl, and a turtle. We also had several people, including Uma Thurman from Pulp Fiction, Dwight from The Office, Kanye West, Jigsaw from Saw, and Sloth from Goonies.

Since I adjusted the order of project in the class, these large scale sculptures had more time to dry before firing, but the students were also the least familiar with clay techniques and limitations, so we did have some pieces crack or explode during firing, mostly because the pieces were too thick and had air pockets trapped inside the thick sections. My plan is to show the students how to work with epoxy before the end of the quarter so that some repairs can be made before the works are finished.

The second project this quarter was working with slabs. The project requirements were that students would make stacking and/or lidded forms. These pieces also ran the gamut from nesting bowls, candle holders, and boxes, to more castles, caves, and a container made from leaf shapes.

I hope that the students energies will continue strong through the end of the quarter with glazing and repair so that I have some exciting work to show in the Student Exhibition in the Spring at Larson Gallery.

Posted by Rachel at 1:05 PM No comments: