This coming Tuesday is the first day and opening reception of the annual Department of Visual Arts Student and Faculty Exhibition at Larson Gallery on the Yakima Valley College campus.

The show features work by students in all studio art and photography classes at YVC in the Spring, Summer, and Fall of 2018 and the Winter of 2019. Student work on display includes ceramic sculpture and functional pottery, paintings, drawings, prints, photographs and mixed media. This year's show also features at least one collaborative piece done by a whole class.

My student work includes an unusually high amount pieces from the hand-building portrait project, including work I've talked about before in this blog.

The show opens on Tuesday, April 30 with a reception from 5-7pm and awards at 6pm. The exhibition continues through May 25, 2019.

The Larson Gallery is located on the corner of Nob Hill Boulevard and 16th Ave on the Yakima Valley College campus (across from Taco Time). The gallery is open Tuesday - Friday 10am - 5pm and Saturdays 1 - 5pm. The gallery is always free and open to the public.

Posted by Rachel at 8:24 PM No comments:

Spring quarter has gotten off to a busy start. Shows, installations, kid projects, hiring committees, and perhaps I've said "yes" to a few too many things. My winter quarter students were so prolific that I've got two more posts partially done, but I just haven't finished and posted them.

One of the things my winter quarter classes did a lot of was knob 'n alls. I don't really know how it is supposed to be spelled. (It used to annoy Shannon, one of my advanced students when students would call them "nominals.") However they're spelled or pronounced, they're lidded containers made by throwing the lid attached to the bottom in one closed form.

These forms are usually a fairly popular shape to make. The basic shape, if you don't cut off the lid, is fun to throw and I use it as a basis for a lot of my own forms.

The shape can be thrown, then the lid cut off when the piece has dried up a bit. The lid can be cut off with a "key" which basically means you cut the lid irregularly so that it fits on only one way. The cuts can be a part of the overall design of the form. They also don't take a lot of pre-planning.

The other way to do the lid was something I learned from a student. Of course some of my students are more than students. They make a significant impact on the studio and they make my job easier and more fun. Janice was the one who discovered the technique I now prefer for knob 'n alls.

Janice's technique is to press a flat tool into the side of the wet wall once the form is closed. The wall then becomes the gallery that holds the lid on. Lauren and possibly Leticia (from this post) used this technique. You can't see the galleries in these views of the finished work, but you can see them in this post of my work in progress.
The knob 'n alls from winter quarter were done mostly by beginners for their third project. Lauren's was in the advanced class and she did these as a kind of recuperation break while she dealt with an injury.
There was a great deal of variety in the lidded forms, decoration, and glazing. Adela and Lauren both used Ninja Junior Crawl glaze on their lids and Adela just managed to avoid sticking her lid to her base as the glaze ran.

Adela's lidded jars were tiny, but she made each one very differently. The orange was a favorite during critique, as was Amber's apple. Strangely no-one tried to make a banana knob 'n all.  Adela, Amber, and Lauren also achieved the challenging tall knob. Lauren threw some of her's separately and then attached them to the lids later. I think Adela threw hers in one.

If you're in the Yakima area and you are interested in seeing some of my students' work in person, we have two exciting opportunities coming up soon. The Department of Visual Arts Student and Faculty Exhibition opens April 30 with a reception from 5-7pm in Larson Gallery. The show continues through May 25. The spring clay sale is May 9 from 11am - 7pm in the lobby of the Palmer Martin building (building 20).

Posted by Rachel at 8:02 PM No comments:

Email ThisBlogThis!Share to TwitterShare to FacebookShare to Pinterest
Labels: functional pottery, knob 'n all, Proud of My Students, student work

I have work in a show at Boxx Gallery this month. The sculpture show opens today, Saturday, April 6 with a reception Saturday from 11-4. The gallery is free and open to the public. And there will be snacks.


The gallery is located at 616 Maple Street in Tieton. I have installed my political bulbs for this show. I decided (at the last minute) to install them in a different arrangement than the grid I have done before. While I was installing, I realized I should install them in the shape of the United States, which is kind of how they ended up, but since I didn't decide this until partway through the process, it isn't really clear.

This show features my most recent political work. I showed these pieces in a grid in Hood River this summer, but I never managed to get great installed images. Maybe I'll remember to take some this month. This installation features both references to the flag, the congress building, and the constitution, but also some more blatantly offensive works.


The gallery is open every Saturday this month from 11-4, and there will be another reception and associated events on April 27 for International Sculpture day. 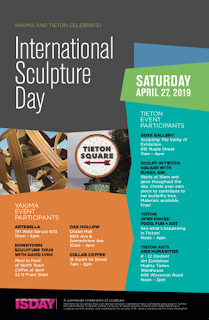 I also have work up at Artebella Gallery, at 1111 W. Spruce Street in Yakima. Artebella is open Thursdays - Saturdays 10-4. (and by appointment). The gallery is free and open to the public.
Posted by Rachel at 10:05 AM 1 comment:

April 27 is International Sculpture Day and there are several sculpture events going on in the Yakima area. Boxx Gallery in Tieton is having a sculpture show (I'll have an installation in this show) and there will be an associated community event in the square that day. And Mike Hiler is showing work at Oak Hollow Gallery.

Artebella Gallery at 1111 Spruce Street, next to Taste and See Deli in Yakima is having some events, including artists talks and a display illustrating the process of lost wax casting. The gallery owner had contacted me earlier this year to ask for new work from me.

When she first contacted me, I told her I didn't have any new work, but then I realized I might have time to make something before April. So I actually got myself into the studio and made something new this winter. Of course when I went to pack up to take her the new piece and a few older pieces, I realized that I did have two or three new pieces from the summer that I had forgotten about.


I pulled the latest sculpture from the kiln Saturday morning. I had tried a combination of underglaze layers and cone 6 celadon glazes. I was trying to create a sense of thickness and color variation that was a bit more subtle than the underglazes on their own.

I fired the work in my small kiln, since I was firing so little, but the kiln didn't quite reach temperature. Regardless, I was pretty happy with the results fo the firing. The blue celadon has some mottled texture on the top bulb that is only evident when you look closely at the work.

The results weren't perfect, however. Two of the bulbs have small dry spots after firing. It looks like I brushed up against the side of the piece after glazing, but I am sure this isn't what happened. The strange thing is that I underglazed the entire piece, then bisque it. Three coats of blue underglaze were applied the entire surface, then fired. After bisque firing I added the celadon. So for bare clay to show up, both the celadon and the underglaze came off during firing.


I've had similar issue in the past when underglaze has peeled off of a pot after glaze firing. This has happened a couple of times in the last few years. I think the problem is the fit between the glaze or underglaze and the clay body. I have never seen this issue on a textured surface, only on a smooth, burnished surface. I don't remember every seeing it with underglaze alone, but it shows up as brittle pieces of glaze (with the underglaze attached) cracking off the surface, leaving no evidence of either glaze or underglaze on the raw ceramic below.

Luckily, on this piece the glaze faults were pretty tiny little spots, but I think I do need to do some research into this in the future (though the thought of doing this does not fill me with joy). This is also something I occasionally see in student work, so it is worth it to figure out the problem.


If you'd like to see my new work, or slightly older work, including almost everything pictured in this post, stop by Artebella Gallery at 1111 W. Spruce in Yakima. Tomorrow I will be installing some political work at Boxx Gallery in Tieton. More on that in a future post. 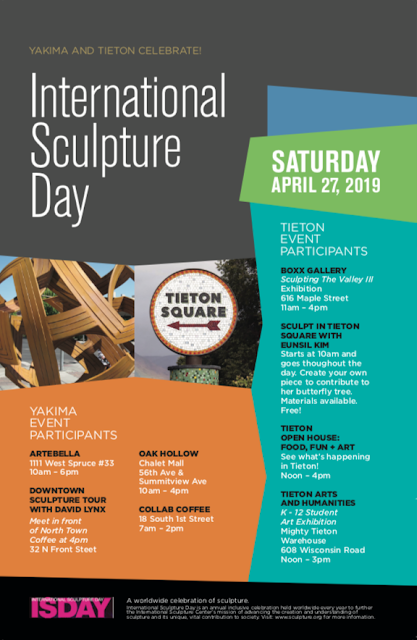 Posted by Rachel at 8:30 AM No comments: