In November and December I did a two-day clay lesson with my daughter's fifth grade class. Since the kids are now 10 and 11 and many of them have done a clay lesson before (just with me, since the school doesn't have art classes AT ALL), I figured this was a good year to do both building and glazing. 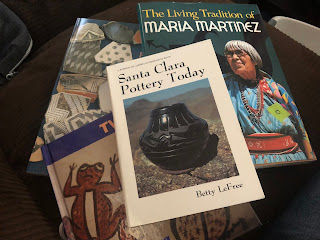 To align with what they're learning in class, I based the clay project on Pueblo pottery, the coil built, burnished and often pit fired pottery of the Pueblo region, including Arizona, New Mexico, and Northwest Mexico.

On the first day the kids used fired bowls as pukis or molds for the bottom of their coil built bowls. I used this method because of the connection the Native American tradition, but I regretted it early on.


Once I realized how many students were struggling, I had the students remove their work from the pukis. Some students were able to work with or without the mold, some had repairs to do once the clay was removed, and some ended up flattening their pieces into wide shapes once out of the mold.

On the first day of the lesson, because of a miscommunication that was my fault, I didn't have any student helpers from YVC for the lesson. I usually bring assistants for these lessons and the assistants can give some attention to those who are struggling. This time around students struggled and I wasn't able to get to them or spend as much time with each student.

Plenty of students did fine and only one student had piece undergo such damage that it needed to be entirely rebuilt. Lots of students successfully made bowl shapes and a few controlled the shape more than that. One made a heart shaped dish.

My daughter had been looking in the books with me the night before and really wanted to make a wedding vase form, so she did. She had talked with me a bit the night before about how to separate the two necks and how to join them. She finished all of it during class and I didn't let her work on it after class.

All of the kids would have benefited by having another hour or two to work. If this were a real art class, they could have practiced, planned, built, and revised. It just goes to show that these kids are sorely missing art classes as part of their elementary school curriculum. One lesson a year doesn't make up for the fact that these kids get to opportunity to learn about art making in different cultures, learn the hand skills that would allow them have control over the clay, or learn about the process and materials used for different techniques.

Once we brought the clay back to the studio for firing, several of us spent some time fixing a few cracks in the students' work and making adjustments to pieces that were too thick or too thin. I don't like to do this to students' work, but with the time limit the students were only able to do so much and I didn't want their work to explode in the kiln.

After the pieces were fired, I brought them back and led a glazing/underglazing lesson. The inspiration this time was San Ildefonso polychrome pottery. I had the students use just two underglaze colors, terra-cotta red and brown. They also had the white clay body that could be incorporated into their designs. Instead of pit firing, I had the students apply a clear glaze over their underglaze decoration and then fired the work again.


I was able to give the students homework this time. I left my resource books with their teacher and each student got some time to look through the pictures. Based on their observations of the decorations on the pottery, they drew plans for their decoration the week before they actually had the underglazes and the bisque fired pieces.

Some students closely followed their original designs and some did not. Overall, though, when looking at the whole group's work together, it is easy to see the patterns of lines, zigzags and repeated shapes inspired by the images of Pueblo pottery.

Posted by Rachel at 1:43 PM No comments: