Yesterday was officially the last raku firings at our "old" building. The art program is moving to the new Palmer-Martin building over the summer and all our classes will be on the south side of the street next year.

There will be a ribbon cutting ceremony and open house this coming Tuesday at YVCC.  I will not be able to attend, since it is scheduled during one of my class critiques, but I believe the studios will be open. I hope to get over there later in the day or later in the week.

My students and I fired the kiln for about five hours yesterday and got through at least five rounds of work in the super heat. The morning was actually fairly nice, but the heat, sun, and smoke started to be exhausting by the middle of the day. One thing I'm looking forward to in the new space is air conditioning in the building that actually cools the building. 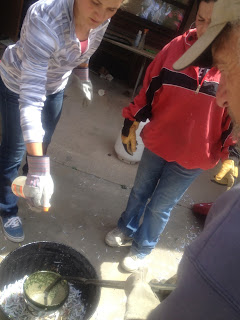 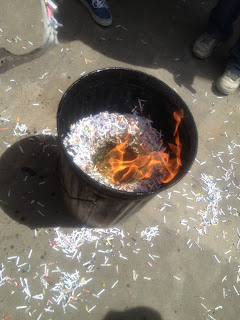 It might not be fair to blame the air conditioner, since our gas kiln was cooling down from about 600-700 degrees in the morning, but the studio has been unbearable most of the last two weeks. In the new building, kilns will be in a separate room from the rest of the studio, so hopefully we can keep cool in the warmer months.

Yesterday's firing went well, we only lost two pieces, one was dropped, the other was too fragile to raku safely. The glaze results were pretty good all around and we had a lot of variety. We horse-haired a few things and several students tried resist techniques and layered glazes in new and innovative ways.


The day was pretty warm in general. The high according to the NWS was only 90, but I think the forecast was higher than that. I know we felt warm because of the heat inside the building and because we were adding to the heat in our space with heat from the kiln. The smoke from the reduction buckets made it unpleasant to be outside in the shade much of the time.

Posted by Rachel at 2:02 PM No comments:

The other things I built last weekend at the Gallery were some pots to put in my planters. I read about this method to keep potted plants watered correctly. I tried in in three of our planters.

You're supposed to fill the planter with soil, but leave a space in the middle for a smaller terra-cotta planter. Then the plants go around the exterior. You pour the water in the small planter. The terra-cotta holds the water, but it seeps through the porous ceramic into the soil and waters the plants slowly. it seems to be working pretty well for our hanging tomato plants and our strawberries this year. 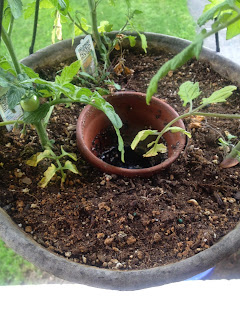 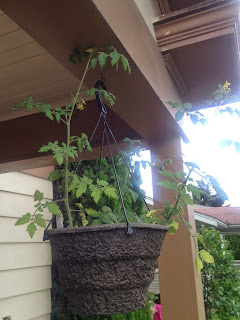 I decided to make a few extras to go in other planters and the porch box, where our flowers and basil are very sad indeed, despite regular watering. I made some small cups at the gallery and boxed them up for the drive home. The simple, small shape was easy to transport, wet, in a narrow box. 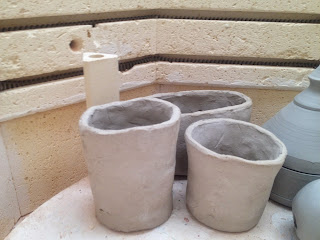 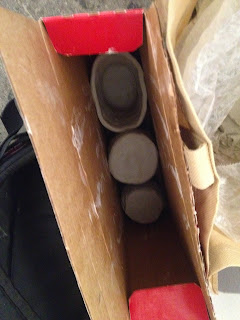 This weekend was my shift at CORE Gallery. It is a nice show, featuring bright shiny and paintings by Kalindi Thompson and a large installation by Aaliyah Gupta. The work of both artists benefits from an up-close look. The show is open through the end of May. I walked around the neighborhood before my shift and I think the highlights were a print show by Jacob Lawrence at Davidson Galleries and a ceramic show, but I've forgotten where the ceramic work was.


In the past I've brought reading for my six hour shift in Seattle. This time I brought reading and some clay so I could get a head start on my summer studio time. It's the end of spring quarter, the time when, every year, I get anxious to get in the clay studio at home and I also start to worry about getting enough work done in the too-short summer.

This time I stopped by Seattle Pottery on the way to the gallery to replenish my clay stocks, but somehow I managed to forget most of my tools, including my cup of slip. I ended up roughing in my form fairly loosely with the tools I did bring. It worked just fine, especially since I then put the wet sculpture in the car and drove over the pass to get home.


I did remember some sprigs. When I got home I needed to repair a few parts of the sculpture, but not too bad. I also worked on the texture behind the sprigs.


My home studio is pretty messy right now, and when school is over in 3 weeks, I'll have to clean it before I can get much work done, but at least I've got a head start on some building before then.

Posted by Rachel at 4:42 PM No comments:

My Experience at the Tour of Artist's Homes and Studios

This weekend I was at Michelle Wyles' studio with the Yakima Pottery Club. The weather was nice and quite a few people visited.

My daughter was with me the entire time and she managed to stay patient and mostly enjoy the 6 hours of the show, though I had to bribe her with the promise of a book to get her to help me pack up at then end. She brought her own work and set it up on the end of one of my "tables."

My daughter's patience started to wane at the end of the the show. Earlier she had taken over the money purse and declared herself in charge of sales and making change for purchases. She also kept a runny tally in her head of sales to that point. Unfortunately, sales were slow enough that she had no trouble with this task.

My studio is getting fairly full and I had made some functional work earlier in the year as an experiment, so I priced everything very low with the intent to sell well, make some money without a commission and clear out the studio. I was a little surprised that $10 and $12 bowls didn't sell, though people admired them, and I only sold a handful of $5 handheld sculptures, though people expressed how much they liked the work. My daughter, too, was surprised. She expressed her reaction with this question "Why do people say they like the work but they don't buy it even though it's really cheap?"


This was a reminder to myself to say "no" to events like this and June's Art Fest. I decided about a decade ago that I liked making my own work and teaching, but I've never much liked making work that will sell. And I've never been a big fan of the effort it takes to sell the work at a fair or similar setting.


I used to assume that if the work is well made and interesting, and people say they like it, they must not be buying because it is too expensive. Saturday was an experiment, I lowered the prices to the ground, and I did not see a jump in number of sales or total money taken in from sales, though the complements continued fairly regularly. If I were spending the entire day (about 9 hours total, though I haven't unpacked the car yet) doing a show like this to get a verbal boost to my ego, maybe it'd be worth it, but that's not why I make the work. I'm looking forward to the start of my summer studio hibernation (next month).
Posted by Rachel at 12:43 PM 1 comment:

Email ThisBlogThis!Share to TwitterShare to FacebookShare to Pinterest
Labels: my work, sales, shows, Tour of Artists' Homes and Studios

Tour of Artists' Homes and Studios 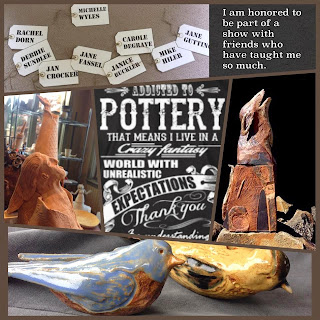 I'll be with the Yakima Potter's Club at Michelle Wyles' Home. Come see us. I'll probably bring some small work and maybe a few bike pieces. 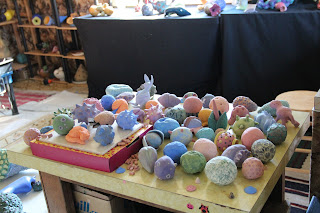 Posted by Rachel at 5:00 PM No comments:

Monday is the Latin Music Festival at Yakima Valley Community College. For the festival, the Yakima Morelia Sister Cities organization brings in musicians from Morelia, Mexico. For the past few years, they have also brought in a visual artist from Morelia to demonstrate for or work with our students.

This year the artist is Jóse Luis Soto, a mural artist who works with groups of people in Mexico and other places to paint or create mosaic murals. Soto met with some YVCC students and faculty on Wednesday, did a presentation on the history of Mexican murals on Thursday, and spent Saturday afternoon with a group of students and community members at YVCC to begin painting a mural based on a Dada poem the students had written on Wednesday.

The students brought in sketches of imagery based on Yakima, the sister cities relationship and the poem. The painting incorporated these sketches and other imagery that developed during the day.

There was a lot of progress made during the four hours on Saturday and students painted alongside several children who enjoyed being involved in the process. Monday the YVCC students will continue painting the mural and may even make some adjustments to some of the children's contributions. 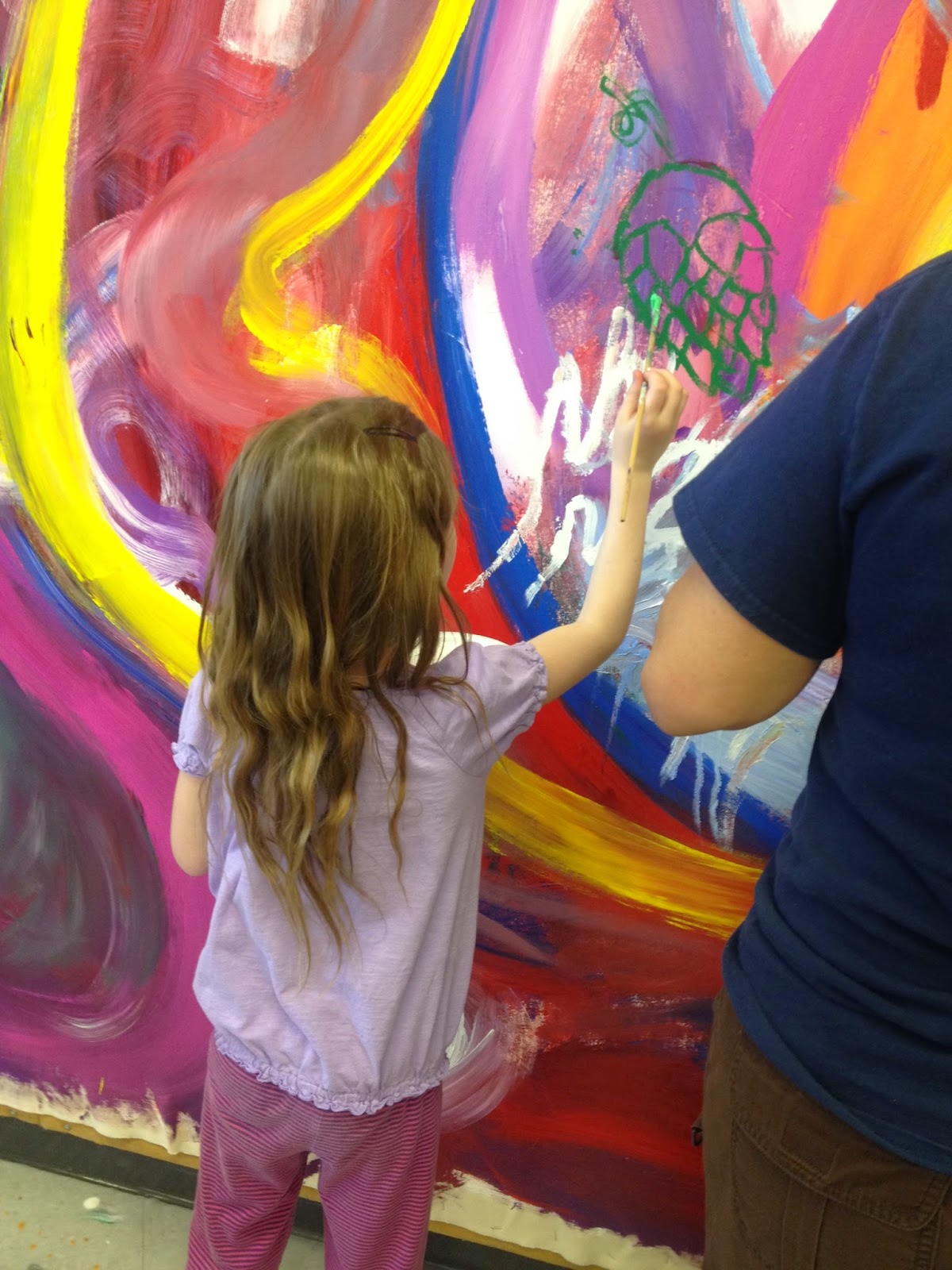 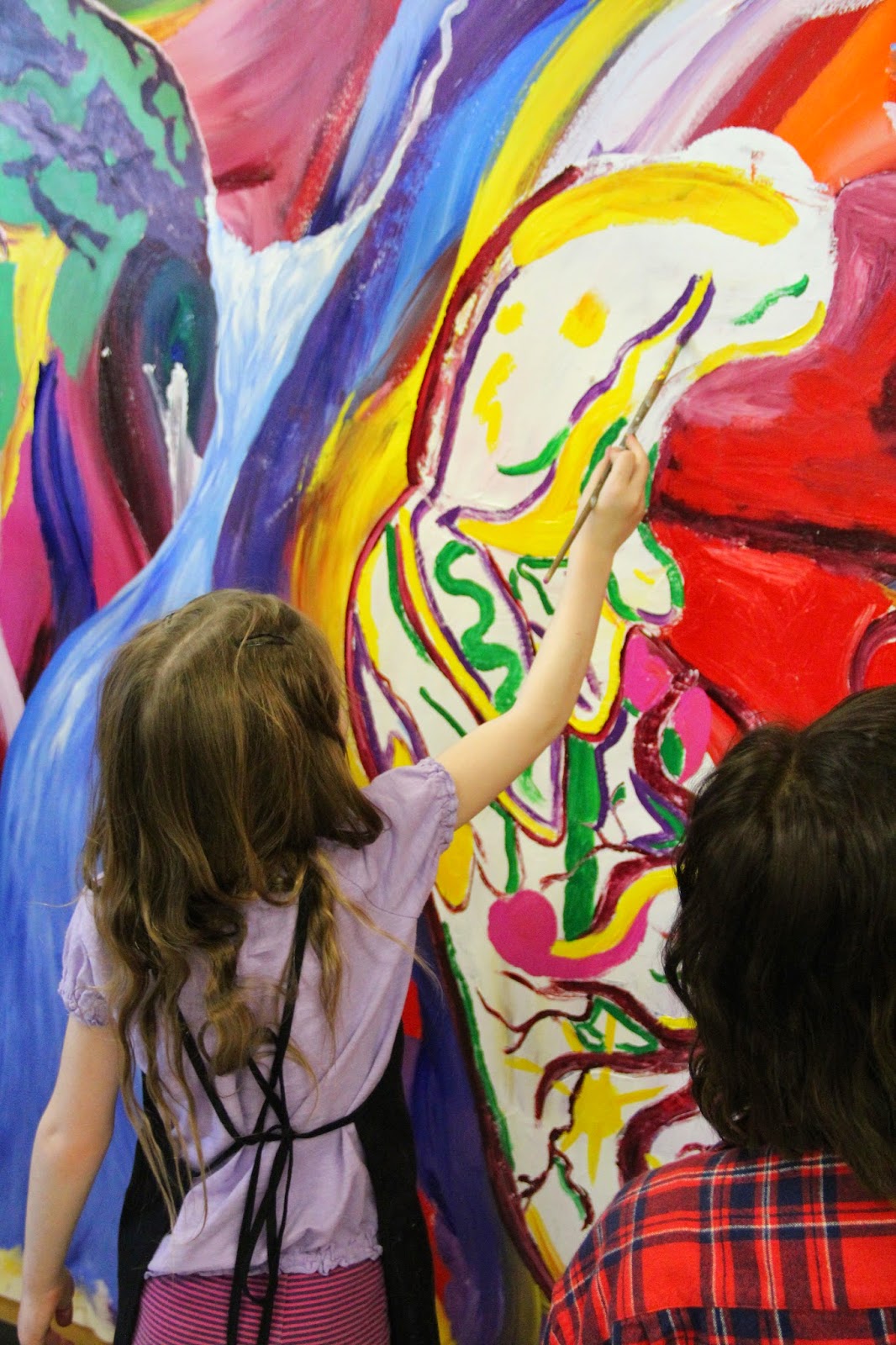 I came to watch the process and to report on it for my blog but our other two full-time faculty were involved in painting and photographing the mural process. The finished mural will become part of the Larson Gallery's permanent collection and may eventually be on display in the YVCC library in Grandview.