Michoacán, Mexico, will discuss the history and evolution of murals in Latin America. FREE.

Tuesday:
Tuesday, May 5, 2015 from 5-7pm at Larson Gallery on the corner of Nob Hill Boulevard and 16th Avenue, the YVCC Department of Visual Arts will be hosting its annual Student and Faculty Exhibition, featuring work made by students in YVCC art classes in Spring, Summer and Fall 2014 and Winter 2015. Work includes sculpture, pottery, painting, drawing, photography, prints, and mixed media. FREE. Open to the public, awards at 6pm, there will be snacks. 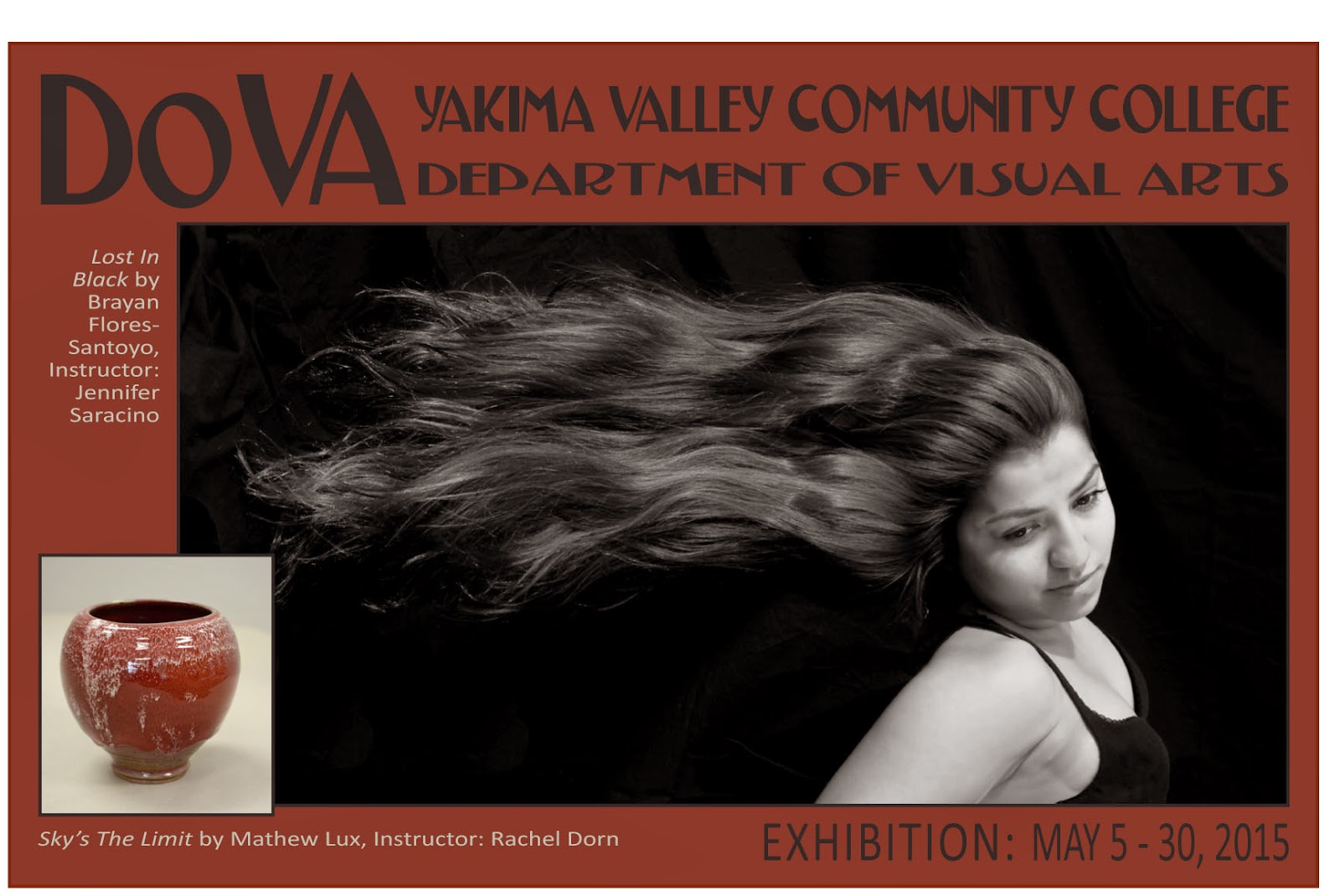 Next Thursday:
Thursday, May 7 from 12:30-1:30 in the HUB on the Yakima Valley Community College Campus, join us for the annual spring clay sale. Featuring inexpensive work created by students and faculty at YVCC during the previous quarters. Get some handmade ceramic dishes or sculpture for your mom for Mother's Day! 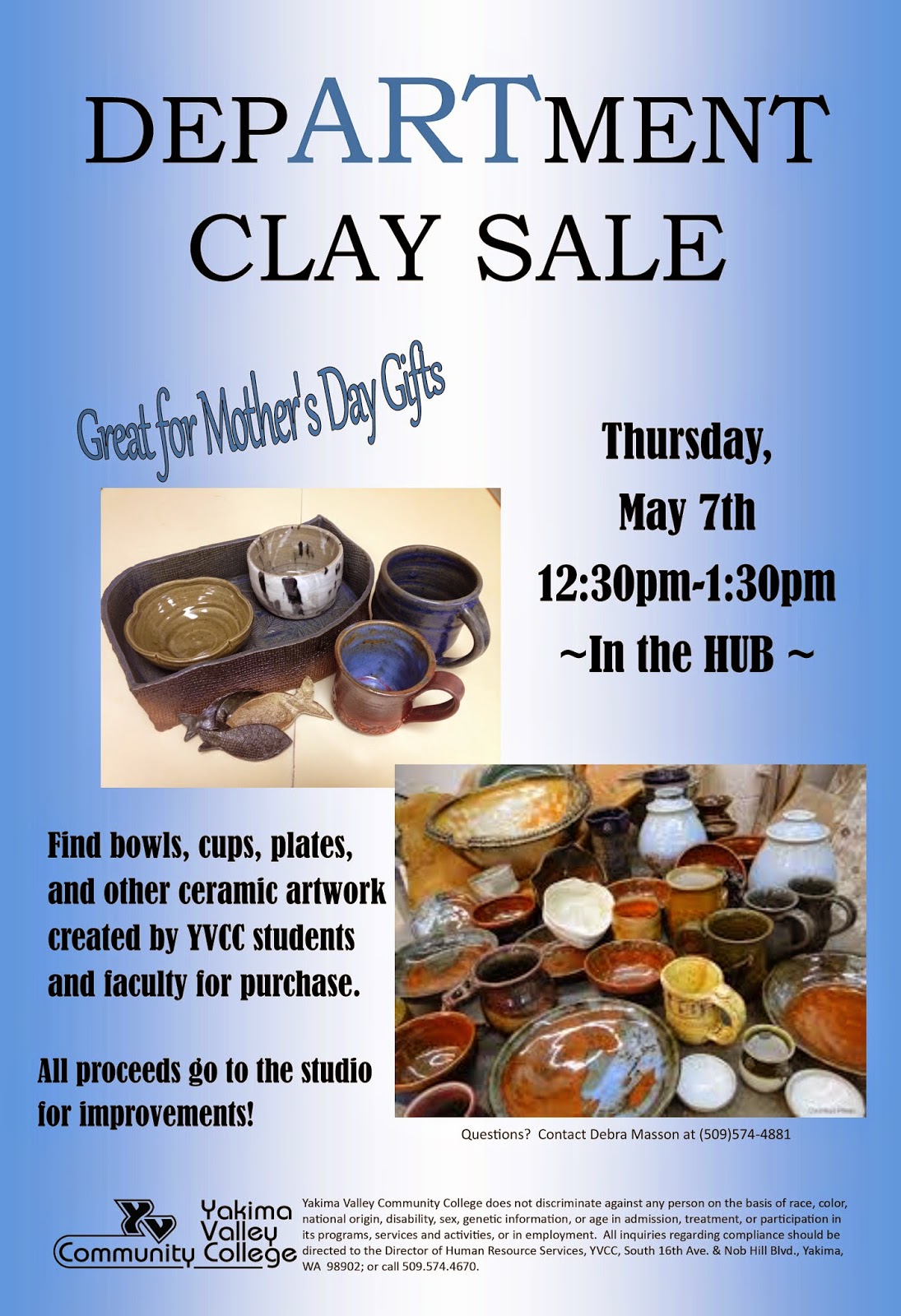 Posted by Rachel at 4:31 PM No comments:

This weekend I didn't have to go to Seattle for the first time in three weeks, so I got some garden planning and planting started and I did a little bit of studio work done.


I threw some plates last weekend after I got home from Seattle. I trimmed them during the week and loaded them in a kiln this weekend. It isn't quite full so I'll probably fire it next weekend.


This afternoon my husband was painting the back wall of the studio with a spray gun. He needed my help to periodically fill the spray gun container, so I brought some clay out and make a quick planter shape. We planted part of our garden this weekend, but I wanted another large planter. I figured it would be cheaper and easier for me to make one than to buy one.

I used some Arleo Sculpture clay from Clay Art Center. This was the first time I'd used the clay and I love this one. It feels just like my raku/sculpture body from school. It is fast and workable, but the surface stays pretty rough, which means it might not be the best choice for my sculpture. My daughter came out to work with me but she didn't like the clay. She said it was too hard, but I'm guessing she meant rough.

We ended up spending a nice afternoon in the yard together, though our activities were a little unconventional.


I didn't want to spend much time on the pot, so I coil-built it fast and pressed some acorns around the rim for decoration. I want to keep the pot outside in the garden area, so I probably won't do a lot as far as glaze decoration.

Last week I installed some work in a window on Mercer Street in Seattle. The installation is part of a group of works by different artists installed in windows in the South Lake Union area as part of Shunkpike's Storefronts program. The work will be up through July. You can visit anytime, since the work isn't in a gallery, it's never closed (it is also never open).

The work is in a window on the south side of Mercer between Westlake Ave and Terry Ave. You can see the work from the car, if you're driving down Mercer. This weekend my family went to see the Pompeii exhibit at the Pacific Science Center and I pointed it out on the way there and on the way back. There is a second, larger installation to the east of mine if you're not sure where to look.

All the artists will be giving short talks and answering questions about their work on May 7 for the First Thursday Art Walk. I'll be going first, at 6pm. (For those of you in Yakima, May 7 is also the day of the clay sale at YVCC--you can buy your mother's day pottery from 12:30-1:30 in the HUB).

Installing the work was a challenge. My window is accessible through the parking garage, but I had to bring my own ladder. The window is pretty tall, about 10 feet, so I also needed a ladder inside the space. On the second day of installation, I brought two ladders. On the first day I climbed up the ladder into the window, then pulled the ladder up after me. 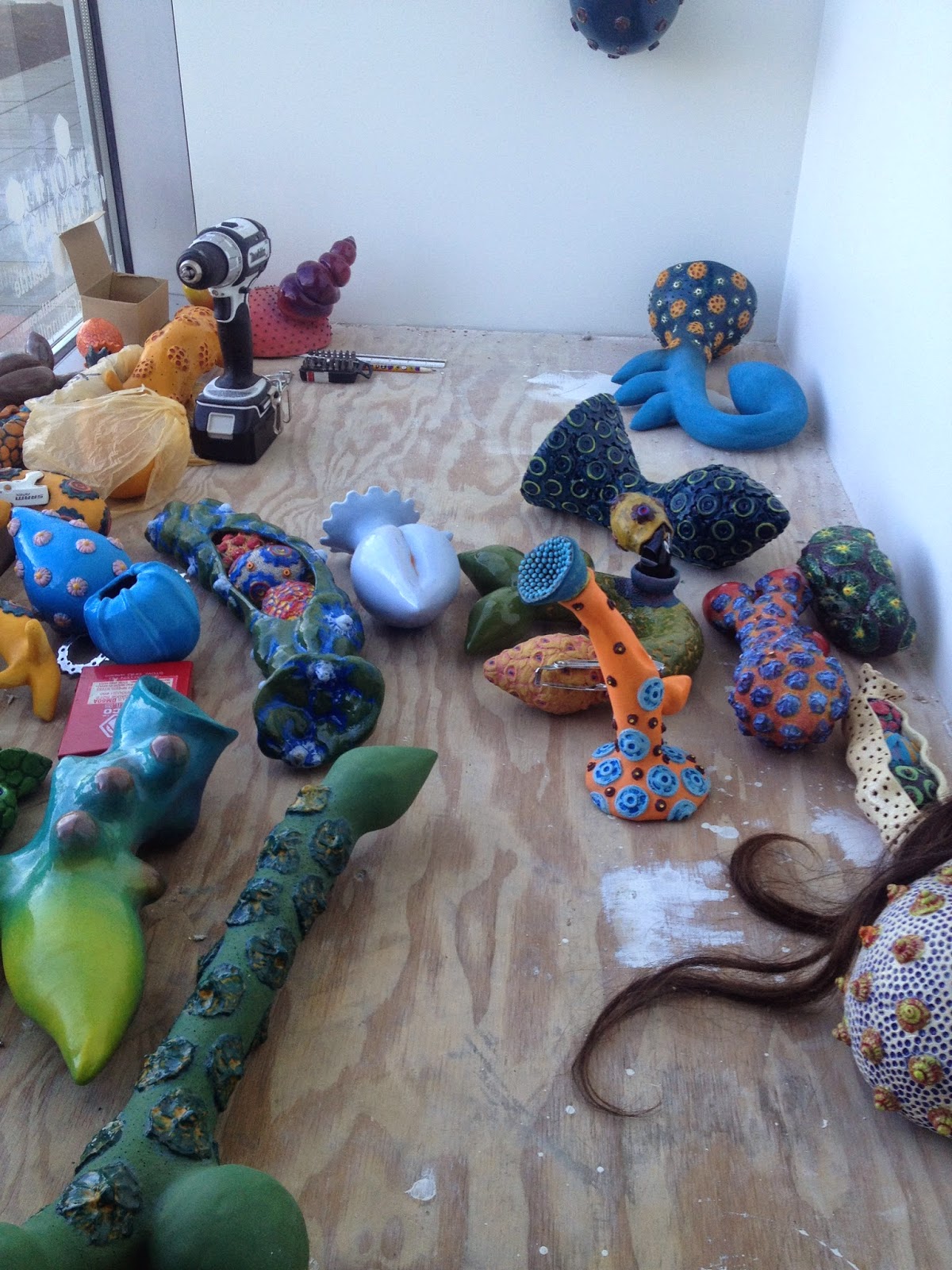 I had to lift the work up into the window before I could climb in, it was a strange setup for planning

I'm not great with ladders and heights, so this was not my favorite part of the installation process. At one point both the woman in charge of all the windows and the woman next to me borrowed my ladder and left me stranded in or out of the window.

Later, I knocked one of the pieces off the wall with my knee on the way down the ladder after doing adjusting the light at the top of the window. The piece broke, but luckily didn't knock anything else off the wall. I had extra work and was able to adjust the installation so that the missing piece wasn't a problem. Additionally, the piece that I knocked off the wall was and older piece. This piece was originally made for a similar installation I did several years ago. Those pieces had fairly small openings in the back for hooks. More recently I have been careful to create large openings in the back of wall pieces to accommodate large headed screws and/or L-hooks.

I had two days (during my spring break) to install the work. I probably could have done it in one, but there were a few things I didn't know about the space ahead of time. I actually learned quite a bit about this particular installation process. Next time I would just plan to paint the whole wall before I began. For some reason the person before me only patched the holes but didn't repaint. I would also bring a stool, two ladders, an extra light, a sanding block and an extension cord.

The particularly nice thing about a two-day installation is that I can have ladder-breaks. These are 10 minute walks that acrophobics take every time they install a couple screws up high. After 10 minutes on the nice solid ground, my hands have dried off and I have stopped shaking. 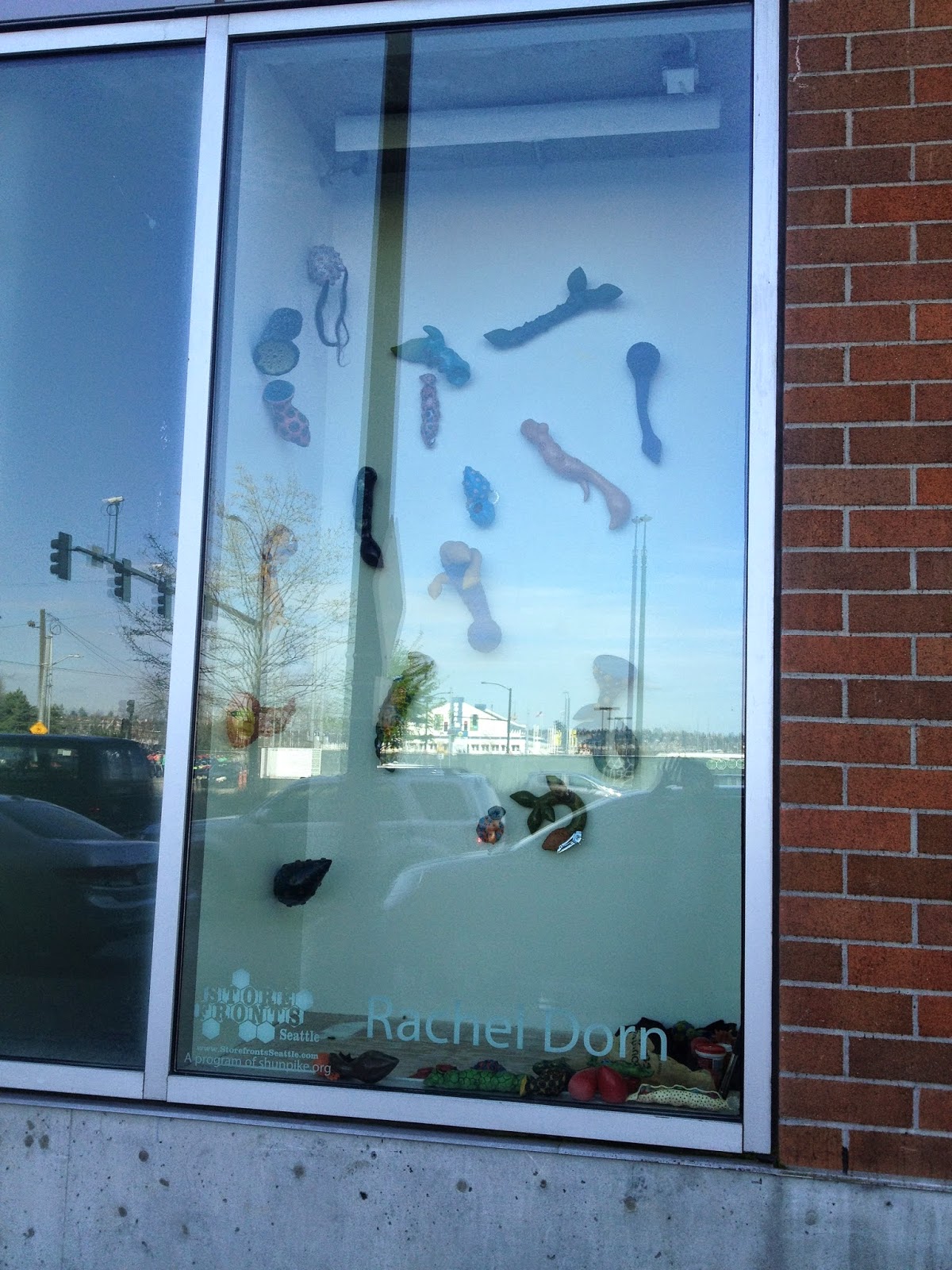 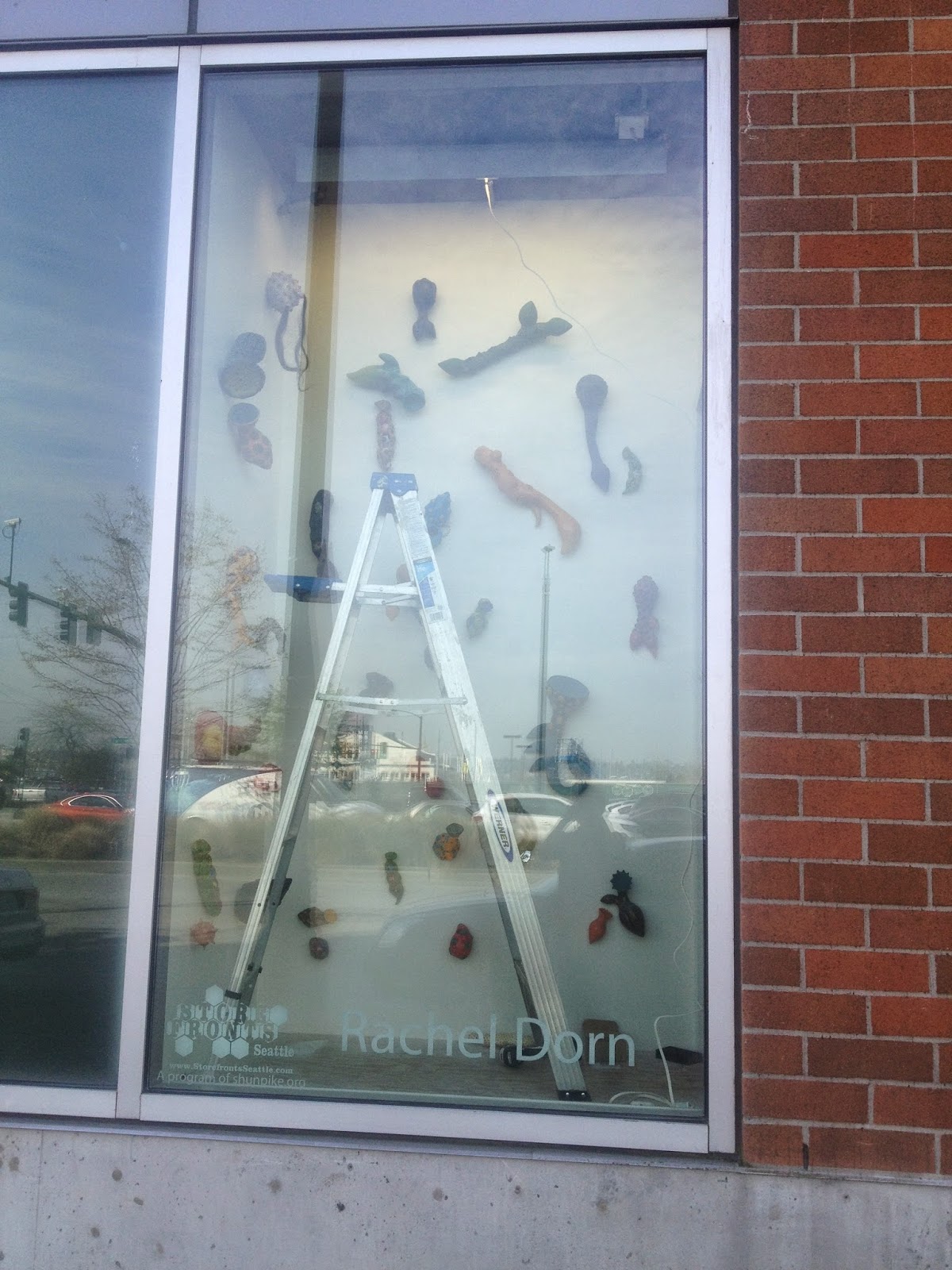 The two day install also allow me a trip to Lowe's and a fabric store (don't go the Jo-Ann's in Renton, BTW) to collect all the things I forgot the first time.

The show is going to be up for quite a while, which means a bunch of people should get to see it. It also gives me a few more "shots" at getting the photography correct. During the day, photography outside the window is ridiculous, since the bright sun makes the photographer's reflection more visible than the work.

On the first day I stuck around until sunset, but my phone and camera batteries both gave up right as I started to take pictures. Even so, the shots I got had car light reflections instead of bright sky reflections. This week, I borrowed a polarizing filter from a friend, but I didn't have time to stick around until sunset, so the reflection of the clouds is darker, but the work is still hard to see.

I plan to stick around after dark in May to try to take some more pictures with the polarizing filter. In the meantime, I have a few shots of the individual pieces. I took these from inside the window, so no reflection to worry about. 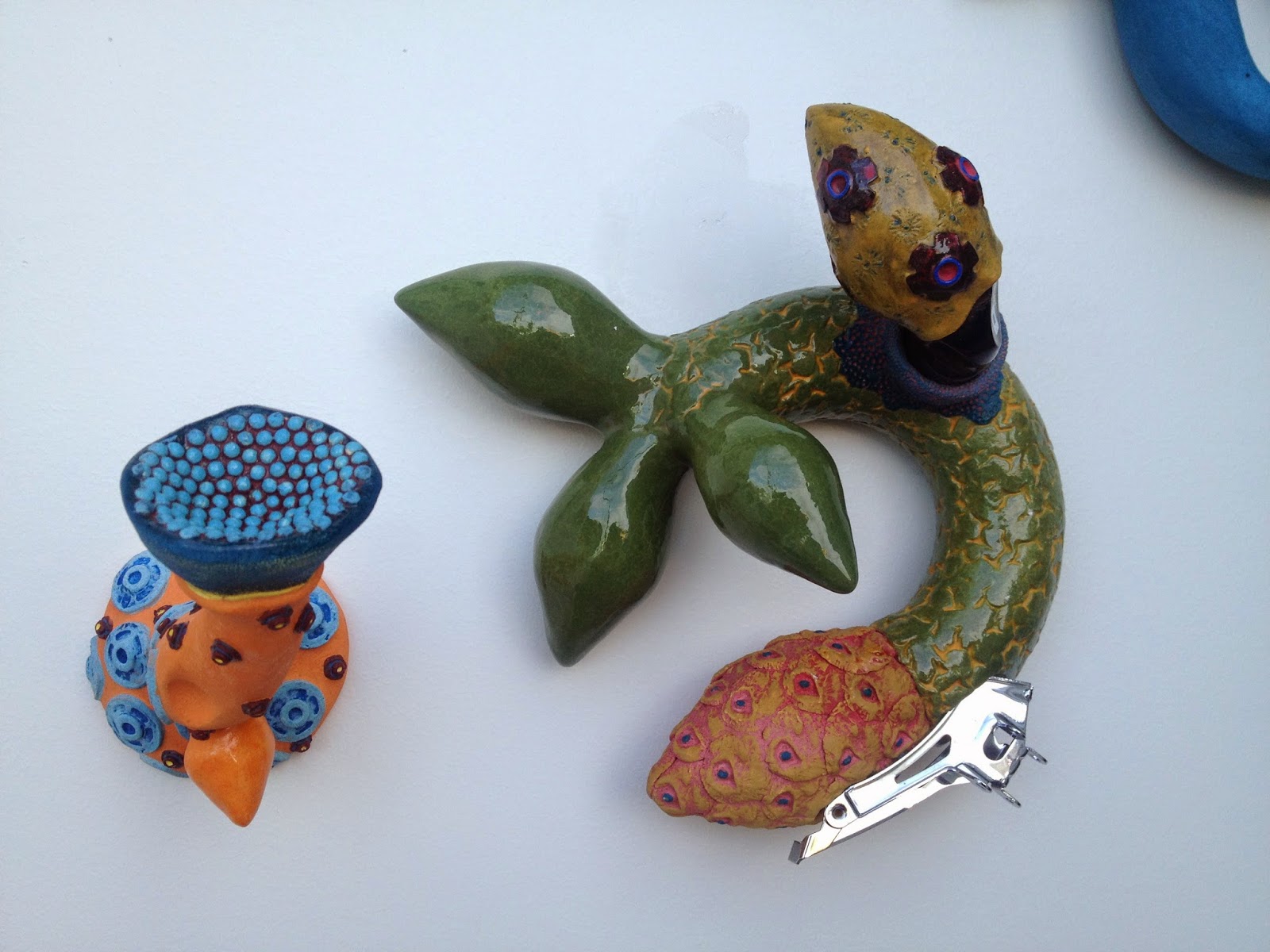 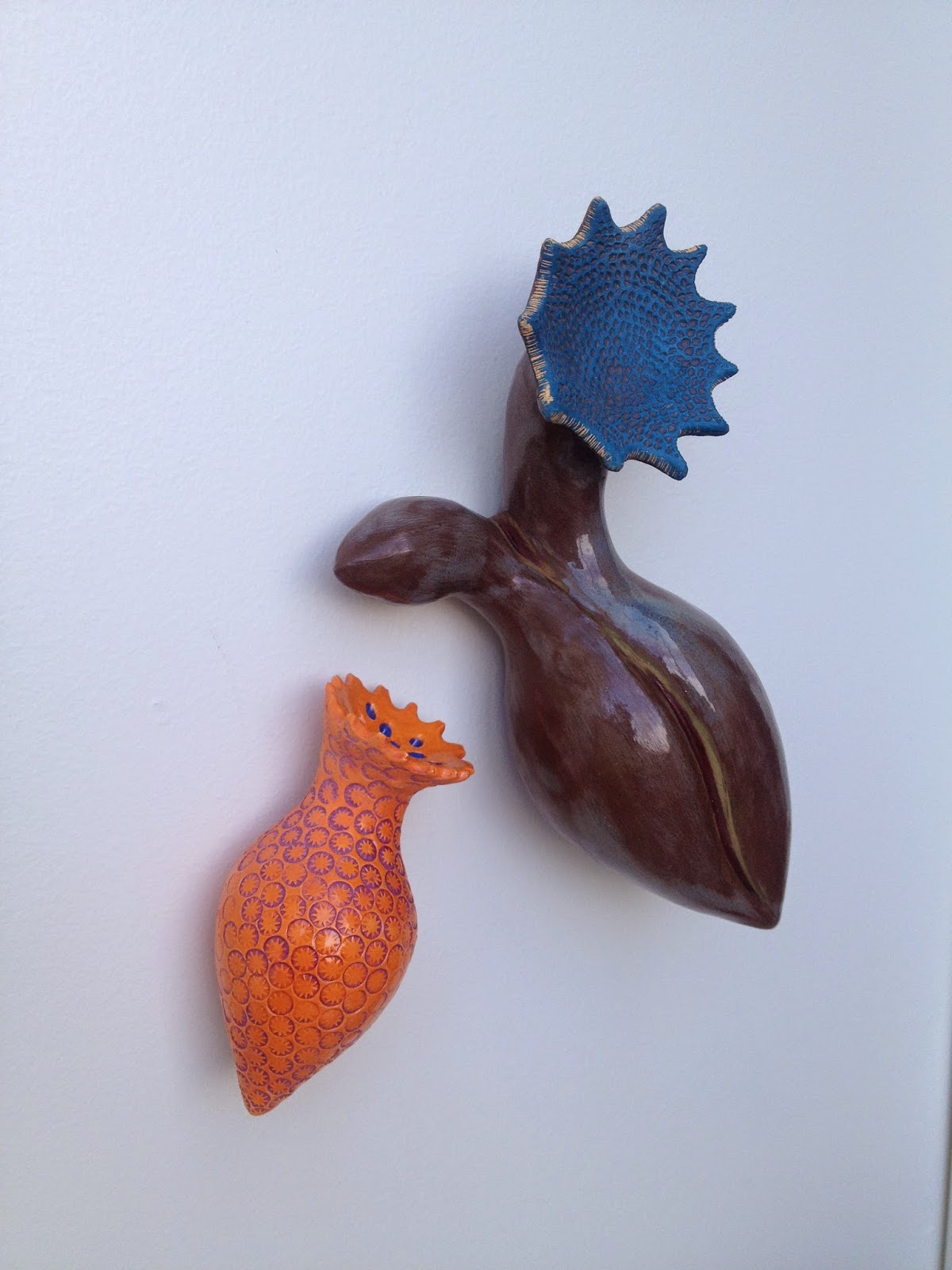 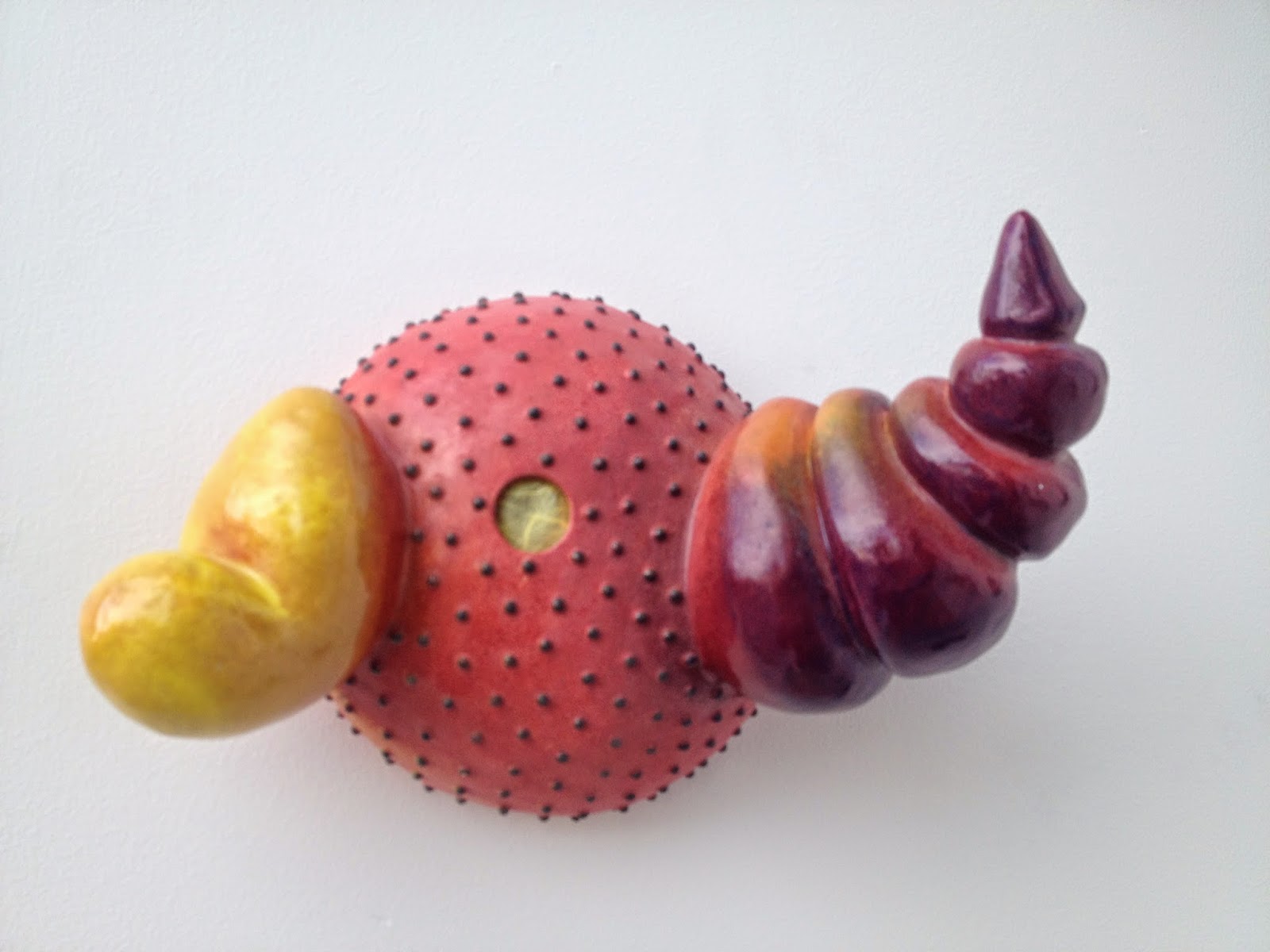 Posted by Rachel at 2:42 PM No comments: