Palmer Martin Hall, in Use and Tour Next Tuesday

This coming Tuesday, November 10, the YVCC Art club is hosting a tour of the new art studios. We are meeting in the lobby of Palmer-Martin Hall at 12:30. If you haven't seen the studios yet, join us. 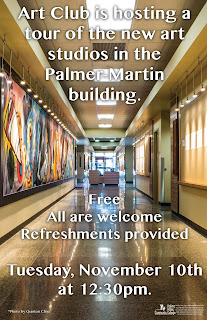 I am enjoying seeings student art displayed in the new building. Drawing, Design, Photography, and Painting classes have had work up on the walls for most of the quarter. I especially enjoy looking at drawings where the student are all working with the same subject. I think it is interesting to see the different students' approaches to the same view.


The wall displays are a way to show visitors to the building what our students are doing in class, they also offer students waiting for class more to look at and hopefully they inspire students in their own art making or to take studio classes themselves.

The clay students don't have as much of an opportunity to show there work. In part this is because there work takes longer to finish, but it also has to do with the lack of shelving for 3D work in the hallway. We are waiting on some shelves that can be put in the display cabinet, so I am hopeful that we will be able to display work later this quarter or in the winter.

Most of the other things that were not yet completed at the start of the year have now been finished or fixed. This week we fired the glaze kiln for the first time in the new building. Results seems good, though the firing was unusual. I've been firing this kiln for years, but in the new space it has significantly more venting, which impacts the pressure in the kiln and required me to adjust my firing this time around.

We also fired the large electric kiln for the first time this week. It had, oddly, shipped without a plug which took several weeks to be replaced, then we ran into another small problem with the controls that delayed the firing a few days.

Our mixer was finally fully installed a couple weeks ago. We've mixed several batches of clay and my students and work studies are starting to understand what the process is all about.


The whole studio is starting to feel more familiar and more comfortable. Glazing started a little over a week ago and now all students have had a chance to used the glazing room and see the results of their glazes. This means, of course, that the quarter is coming to an end. The last day for students to throw is two and a half weeks from today.


Posted by Rachel at 3:33 PM No comments: Links to this post

I unloaded my latest low temperature glaze firing this week. It was mostly successful. Some of my color application inside is a little thin and one bowl cracked.

I decided to slip trail the same design on the cups and paint the interiors with a baby blue underglaze. I didn't get the coverage I should have gotten with the blue--probably because I was rushing, but I'm generally happy with the design.

I used the same slip trailing on some of the bowls and plates.

The color is a bit irregular because these are the same plates I tried to use bubbles on earlier in the summer. The bubbles don't show up with the clear glaze on top, but some of the iron oxide drips show through the clear, making the newly fired pieces look dirty in some spots.

On one bubble bowl, I traced the original bubble design with my slip trailer. I actually like the design and should have done more of it. Maybe I will revisit the idea in future glaze firings.

When my daughter joined me on Sunday, I filled a larger slip trailer for her. She used it some, but there was underglaze leftover in the bottle when she finished, so I started using it. I used red underglaze in the large bottle, purple in the medium size and black in the small like the other bowls.


One of the bubble pieces had green underglaze applied before the iron oxide bubbles, so it was green before I slip trailed. I like the design alright, but its certainly an odd piece in this batch.


I had fun with the slip trailing and I came up with some patterns or design motifs I'd like to use in the next glaze batch I try.

I think I'll mainly use slip trailing and subtle interior glazes again on the next pieces. The glazes are different, however, so I may need to run one batch through the kiln to get used to them.


I expect to take some of this work to Oak Hollow this coming weekend for the holiday show. I'll find out then what Josey wants to keep for the show. I don't anticipate the next batch of work getting glazed until December, at the earliest.

My daughter also glazed some work. She prefers the slip trailer for dripping underglaze and she also liked using the round foam stamps for the red and purple. her blue underglaze application, ironically, is more even than mine.

Posted by Rachel at 6:03 PM No comments: Links to this post

I'm firing a kiln today. This is noteworthy because the last time I fired was in early August and because I didn't get much studio work completed this summer.


I still have a shelf full of cone 6 functional work that needs to be glazed, but I did get most of the cone 04 functional work glazed and in the kiln today. I am taking work to Oak Hollow for the holiday show and the deadline is next weekend, so it was now or never on these pieces.


I figure I used today's extra hour of daylight savings time to get this work done. Since glazing and loading was a last-minute decision, I ended up glazing on the floor rather than cleaning off my tables. I spent a few hours this morning slip trailing and decorating my pieces. Later my daughter joined me and glazed a couple of her pieces, too.


What is pictured here on my floor is almost everything that fit in the kiln. My kiln is fairly small and I realized today that I need more short stilts. I usually fire sculpture, so I only fit a few pieces in at once. I don't use a lot of stilts. This load was all cups, bowls and plates. As I was loading plates today, I realized I have only four short stilts. Unfortunately those four short stilts come in three different sizes, making the short loads especially tricky.
Posted by Rachel at 6:04 PM No comments: Links to this post