Last weekend I had a chance to do some glazing and firing at my home studio for the first time since summer.

I had a couple pieces that I had glazed this summer but never got a chance to fire. Actually, I forgot them when I was loading the last glaze firing. I also had a few pieces I had made late in the summer and hadn't glazed until last weekend.

All seven pieces were fired to cone 6 in a small kiln load. I glazed them with the same glazes and approach as much of the functional work I did this summer. The forgotten mug was a "storytelling" mug from the series I did earlier this year.

Among the oddballs was a funny little teapot I think I made in the summer of 2015. I hardly ever make teapots (a fact made fairly clear by looking at the teapot). I was describing to my daughter what it was I liked about this teapot and she pointed out that what I like is the mug. The lid is an odd shape, too wide and quite possibly made for something else. The opening of the spout is too wide and the spout itself is a little low. The teapot is quite small, and a funny shape for a mug, but also a funny shape for a teapot.

I like the glazing of the body, specifically what I did with the spout. Usually I make teapot pieces during class but get too distracted helping students to actually finish my own teapots. I could certainly use some practice, but I don't get very excited about the form, so it's tough to make myself practice making them when I am home. It is tough to find time to finish such a complex form at work (Seriously, I can finish bowls and the occasional mug, but something that takes more than two steps usually takes more time than I can manage at school--without shirking my teaching or grading duties.)


Though I haven't gotten them to a kiln yet, I also continued under glazing some sculpture from this summer. These pieces still need a second and third coat of the red and something in the interior, plus a few touch ups on the blue. Estimated time for completing these pieces is probably well into 2017.

Posted by Rachel at 3:32 PM No comments: 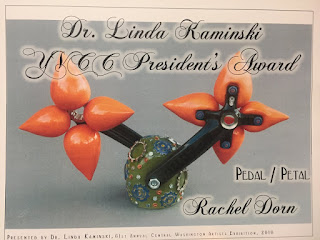 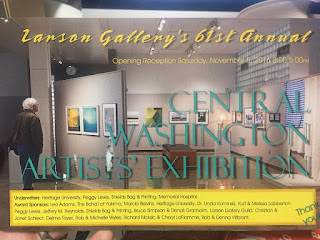 The exhibition is open Tuesday-Friday 10am-5pm and Saturday 1-5pm through December 3, 2016. The show has quite a bit of variety and is worth seeing for work from the usual suspects and some newer artists in the area. Larson Gallery is located on the YVC campus at the northeast corner of Nob Hill Ave and 16th Ave. 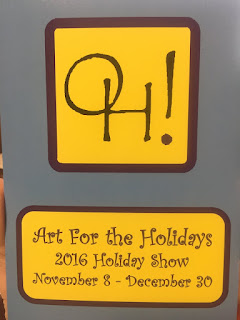 I finally got over to Oak Hollow on Friday to see the show. I especially liked the wood ornaments by Pat and Karen Miller, Eunsil Kim's yarn bowls, and Bernadette Crider's new ash glazed work. My daughter especially liked the crushed glass ornaments and the ornaments in the form of little girls made out of beads and wire.
Posted by Rachel at 11:53 AM No comments: 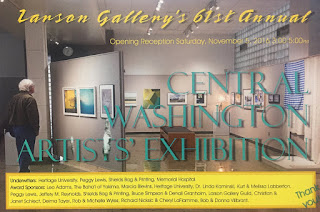 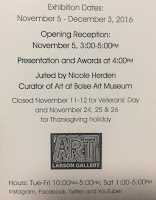 The Central Washington Artists' Exhibition opens at Larson Gallery from 3-5pm today. I have four works in the exhibition and according to the call I received yesterday, I will win an award for one of them.

The Central Washington Artists' Exhibition runs today through December 3. The reception usually has good food, so I hope to see you there. Larson Gallery is on the YVC campus on the corner of Nob Hill Boulevard and 16th Avenue.

Oak Hollow's holiday show opens next week with a reception Saturday, November 12 from noon until 4pm today. Oak Hollow Gallery is in the Chalet Place Mall at 5631 Summitview Ave. The gallery is up the little hill from Starbucks, a couple of doors over from Wray's.

I have functional work in the Oak Hollow Gallery for the holidays. I just brought new work in last week, so if you've been to the gallery in the last year, this is new stuff. Prices are low, lots of artists, stock up for holiday gifts or those November/December birthdays.


And if you meant to buy or see the work at the Boxx Gallery last month, you're in luck because I brought the pieces that didn't sell in Tieton to Oak Hollow. (Also opening today, John Barany's show at Boxx Gallery in Tieton.)

And if you were hoping to buy work that has been at Oak Hollow for a few months, call or e-mail and you can buy direct from the artist.

Posted by Rachel at 9:20 AM No comments: