Last week I fired a batch of protest bulbs I am working on for a show next month. I was disappointed in the color of some of the bulbs, so I made a slip out of the clay I was using and painted that on the pieces that had the wrong color. 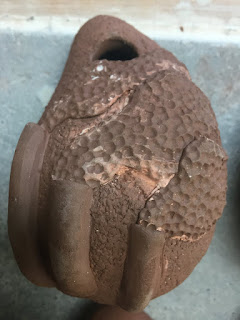 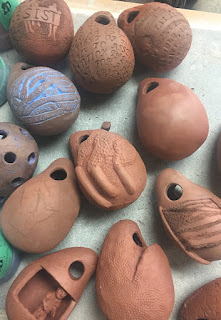 The reddish color doesn't bother me on the new pieces, but my application of the slip was not consistent, so it looks bad on the old pieces. Since I'm not sure why the color is different, its hard to know if refiring will solve the problem. I did fire in two different kilns. One is older, and perhaps the elements have stuff on them. I also forgot to plug the spy holes until partway through the second firing. I guess this might be the answer, but it seems like the spy holes would have counteracted the old kiln elements.

I was hoping that the pieces could be colored and glazed minimally so I could show off the color of the clay, but if the clay color changes mysteriously, I'm not sure if the effect will be what I intended. 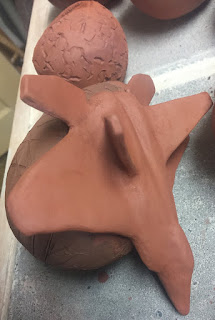 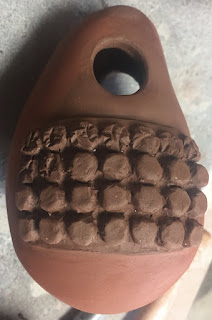 bulbs fired twice, once with slip

I also applied underglaze to a few pieces. The deadline I am attempting to meet is coming up next week, so I don't have much time to make decisions or fix issues. At this point I'm thinking color, maybe a bit of glaze, and done. 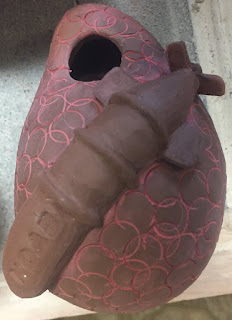 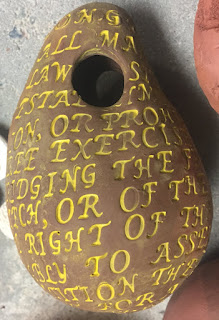 I unloaded the kiln today. I have two more pieces that are unfired. I can actually show the with the underglaze applied and not yet fired, but a few of the pieces are meant to be mixed media, so I'm going to have to carve out some time next week or this weekend to get them finished.

Posted by Rachel at 9:42 PM No comments:

Earlier this year I was invited to participate in an as-yet-unscheduled "Nasty Woman" art show. I had just installed my bulbs at Yakima Maker Space. I had recently been given some clay that looks good without glaze, and I was trying to squeeze in some studio time before the end of the academic year. 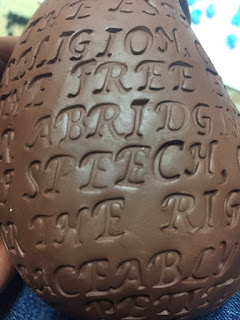 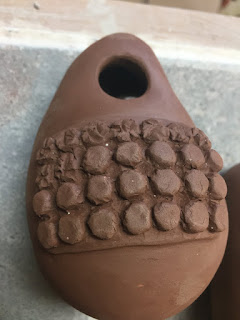 I also had bought some new tools and my daughter wanted to spend some time in the studio with me. So I started thinking about how I could make bulbs (which are fairly quick to build) be a canvas for political speech and political imagery. The ongoing idea of the bulb installation is that it is flexible and adjustable and open to interpretation. Many of the bulbs can be hung facing either way. I used to glaze them with contrasting colors on either side so that they could be rearranged and re-hung. 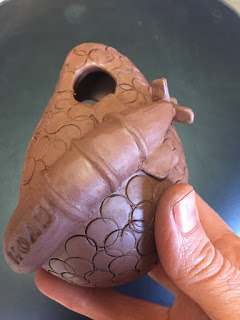 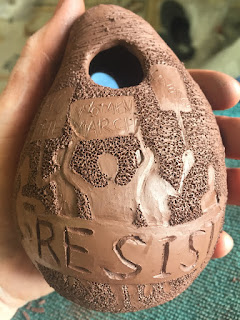 "Mother of All Bombs" and "Women's March"

These pieces are mostly one-sided (or one correct side), but as I was building them, I was debating between keeping the imagery open to flexible interpretation or making the message blunt and inflexible. I decided, on most, to try to include imagery that was easily recognizable and referenced specific issues that capture the political climate of the past year. I tried to choose strong graphic elements that would translate to the small scale of the bulb form. 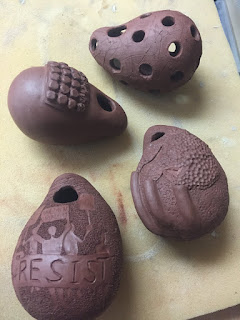 I found or developed imagery that referenced women's health, the environment, freedom of speech, healthcare, and the military. I want viewers to recognize in the imagery, issues where the Trump administration has taken actions to remove protections for regular people. I also want to reference financial inequality, systemic violence in the police force, immigration rights, and the school to prison pipeline, but I have not yet made the bulbs and am less sure of the imagery I want to use. 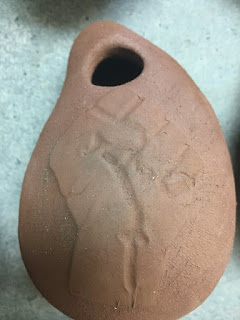 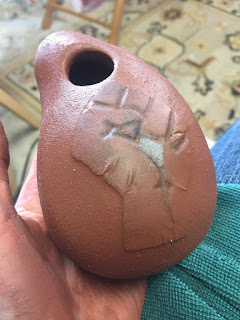 Resist fist after and before firing, the dark and white on the right bulb is a paper template. The slight discoloration on the left is the residue of the paper after firing.

This type of art making is decidedly not an area in which I feel comfortable. In part because of this discomfort, I have some concerns that some of the imagery that can be interpreted in more than one way. I both like and dislike this openness and the vulnerability I feel in putting this work out there. On the other hand, I don't feel comfortable being vocal and active in only my private life and not, in some way, in my professional work. 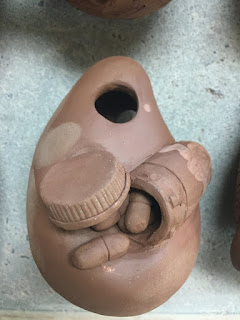 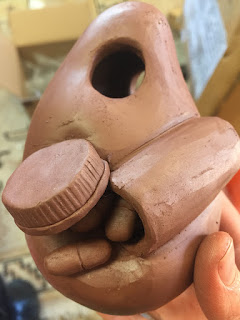 Pill Bottle bulb after and before firing (I must have painted on slip with light clay and probably handled the wet bulb with dusty hands before firing.

I unloaded my bisque firing today. Some of the work does not look how I want it to look at this stage. I was hoping I could get away with not glazing the pieces (so I can get them in a show within a couple weeks), but I made a mistake by not mixing fresh slip using the dark red mica clay I used for the bulbs. The result is that several pieces have smears or smudges of light colored clay that distracts from the imagery.

I haven't decided, yet, whether I will try to hide the smears of light slip, replace the bulbs that don't look as nice, or add bright underglazes like my usual work. (I also haven't decided how large I want the installation to be in a few weeks.) On the one hand, glazing these pieces like my usual work brings the imagery and the effect more closely in alignment with my usual abstract work. On the other hand, keeping the color palette monochromatic requires the focus to be on the imagery and, in some ways, communicates the depressing tone I intend the pieces to suggest.

One additional issue is that the current plan is to incorporate some non-ceramic materials into some of the bulbs. Obviously if I am going to do this, I will be committing to either a glazes or unglazed, bright or dull surface. And by bringing in mixed media, I am bringing in color.

This past week the Department of Visual Arts Student and Faculty Exhibition opened at Larson Gallery. The exhibition features artwork by YVC students who took art classes during the Spring, Summer, and Fall quarters of 2016 and the Winter quarter of 2017. The exhibition runs through May 27, 2017. Larson Gallery is open Tuesday - Friday 10am-5pm, and Saturday 1pm-5pm.

The exhibition features work from drawing, painting, design, printmaking, digital photography, digital design, and clay classes. The ceramic works come from students in beginning levels of wheel pottery, hand-building, and Intro to Clay, as well as intermediate and advanced students in these classes.

Best of Show this year went to a ceramic sculpture, Mother. There were also several other ceramic specific awards as well as awards for other media, purchase awards, and awards sponsored and selected by YVC's president, the faculty union, the Associated Students of YVC board, and others. 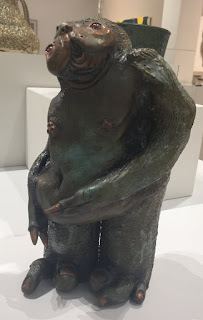 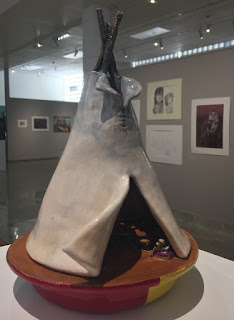 work by students in intro to clay, I believe

The faculty picked some awards last week. I enjoy picking out award winners with the other faculty because it is fun to talk about what the students did and hear from other instructors about what media specific skills or conventions the students used (or failed to use).

As usual, our reception was pretty packed. The exhibition is easier to see when it isn't so packed, but it's fun to have an event where students can show off their work, see their instructors and classmates from a previous quarter, meet some of the Larson Gallery folks, and, of course win accolades for their work.

Much of the work in the exhibition is for sale at very low prices, though more of the ceramic work could be for sale if I could convince my students to part with it. Every year I suggest that students could have their work for sale, every year most students refuse, and every year I bring back some leftover forgotten work to be stored in the art building indefinitely.

This year's exhibition had a sad tinge, especially for me as I was getting the work ready and bringing it over. Janice Buckler, who passed away early last month, has helped with the show and exhibited work in it for years. She has two pieces in the exhibition, which were displayed prominently, and we funded an award in her name in an inadequate attempt to remember her when I'd rather she just be there.

Of course it is the student and faculty exhibition, so the art faculty had work in the exhibition as well. This year's faculty contributions are a little more entertaining than usual, as one of our number had her work hung in an entirely different section of the gallery from the rest of us, one of our number showed as a student, too, since she took a class this year, and one of us had work which elicited a literal shriek during the show when his student realized that the subject was a cat.
Posted by Rachel at 9:34 PM No comments: