Most years I spend nearly all my summer weekdays working in my clay studio at home.  This is my main time to get sculpture built and prepare for shows during the year. Also, this work refreshes me for the coming academic year.


This year I am not going to be able to spend much time in the studio. It is disappointing and I feel a bit sad about it, but I have made the decision to prioritize other things this summer. I have three different types of activities that will be taking precedence this summer: union work, preparing interactive lessons for my online Art History classes, and travel. I had hoped that I would get to supplement this work with a three-day workshop with Beth Cavener on the YVC campus, but with less than a month to go before the scheduled workshop, there weren't enough folks signed up and we had to cancel. 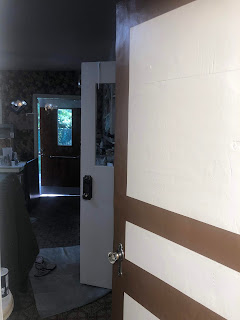 Other Responsibilities this Summer

This spring I took over as union president for the AFT faculty union on my campus. As union president there is some stuff that ends up on my plate naturally, stuff like meeting with faculty groups and representing faculty in disagreements (major or minor) with administration. This year I am also researching and organizing a group of faculty to prepare for the contract negotiations that will take place next year. The work is important, though it isn't fun, relaxing, or refreshing in the way studio time is and it doesn't lend itself to sharing publicly at this point.

Over the 2018-19 academic year I took on the daunting, but rewarding, task of "gamifying" my online Art History series. Since I only have so much control over the learning management system, the game elements are not quite as seamless as I had initially hoped, but with game play (and student learning) in mind, I redesigned the classes to feature interactive lessons in SoftChalk.

I wrote about SoftChalk before because I'm a big fan. I used it for my Clay Studio Safety training lesson and apparently our safety person on campus is now using a similar SoftChalk lesson to run his own trainings. The SoftChalk lessons allow students to interact with the content in more ways than Canvas does, allowing them to do multiple choice but also click on areas of maps or images, drag and drop labels or cards into categories, and even give answer that generate feedback instead of grading.


Last summer I spent about a month on the SoftChalk lessons and integrated them into my Intro to Clay class and my Ancient & Medieval Art History class. The clay safety lesson is used by all of my clay classes as well as my work study students in the studio. But I only had time to prepare SoftChalk lessons for about half the Art History class before I simply ran out of time and energy. I complicated things by working on some other significant changes to testing and assignments during the same time.

Because the SoftChalk lessons and organizational overhaul took so much time and energy in the summer and fall quarter, I ended up teaching the Ancient & Medieval Art History class twice (Fall and Winter) and skipped the second class in the Art History series last year. I was able to make 70% of the changes I wanted to make in the first of the series, about that much or more in the third in the series, which I taught in Spring, and I've made none of the changes in the Winter quarter class.


I was able to get a lot more done for the spring class because I was able to recycle some of the interactive lessons from Ancient & Medieval for use in Impressionism through Post Modernism. I had also made some of the smaller changes in the Spring class during my ESCALA project last spring and I also teach a reduced load in the Spring because I teach a slightly higher than average load the rest of the year.

So this summer I have set aside some time to make ALL the changes in the Winter quarter Art History class, Renaissance through 19th Century and, hopefully, the remaining additions to the Fall and Spring quarter classes.

Of course I am not spending my entire summer working. My family also has three significant trips planned. Last week my daughter and I were in New Hampshire visiting my brother, sister-in-law, and nephew at their house. We had a lovely time watching carpenter ants at the Museum of Science in Boston (and then getting hailed on!), playing board games in Manchester, and visiting Flume Gorge in the White Mountains.

Later this month the whole family is traveling to London! My daughter is very excited. It will be the first time she and her dad have been out of North America. It will be my second trip to London, but the first in nearly 20 years. I spent J-term (January 1 month class) my second year in college in London taking an education class. We spent nearly all of our time in London and had lots of free time to explore. It was great and I anticipate it will be great again this time. We already have our tickets to see the Harry Potter stuff at the Warner Bros Studio Tour and a mile-long list of other things we want to do there, too.

Our last summer trip is one we've planned tentatively but we've done nothing to make it official (like booked a hotel). The plan is, assuming we still have energy in August, to drive down through Oregon to the northern part of California and see the redwoods. My daughter has never been to California and Sean and I have only ever been to San Diego.