This last week I installed my work in a window on Mercer in South Lake Union for the Storefronts Program. It will be up until July, so I'll write about it later.

Before I left for Seattle, I finish a base for another piece that will eventually have a bike wheel on it, maybe even a tree. Right now it's just a base.


I also fired some work for my installation and took some functional stuff (mugs and plates) to Oak Hollow Gallery.

Email ThisBlogThis!Share to TwitterShare to FacebookShare to Pinterest
Labels: storefronts

This week is spring break for YVCC. I don't have a much of a break myself, since I am installing work for Storefronts in Seattle (on Mercer in the South Lake Union area) on Thursday and Friday. I'll also be working at CORE Gallery this coming Saturday for the last day of the current show.

Yesterday I spent most of the day at YVCC working on curriculum with my department, so today and tomorrow are the only days I can get my classes prepped and spend some time in the studio. 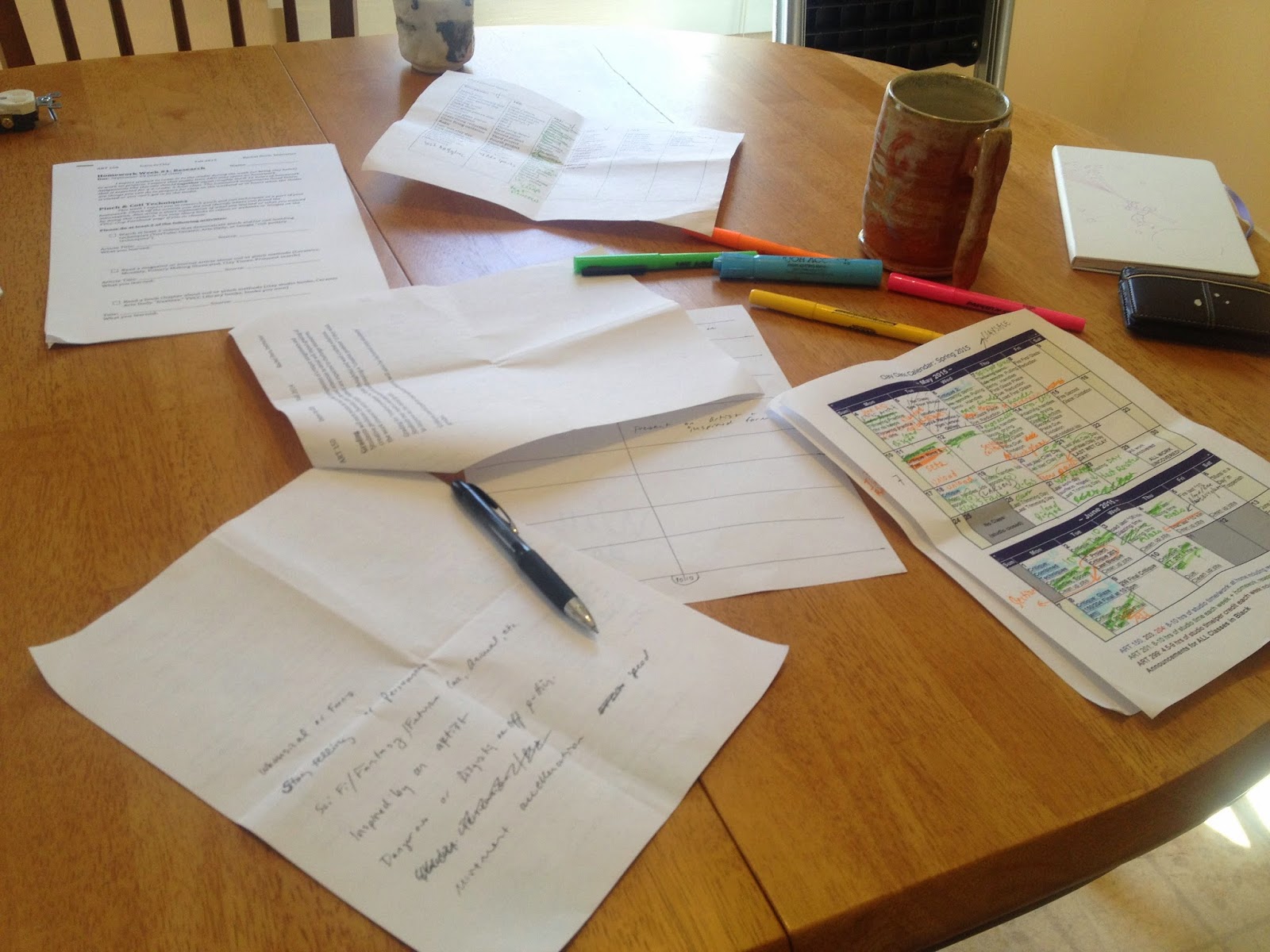 Today I am firing a kiln (which doesn't look very exciting) and preparing for spring quarter classes which start next week. Next quarter I will be teaching an alarming sounding six classes, several of which overlap with each other in time. I teach overlapping classes so that I can offer upper level classes for students continuing in clay. This quarter I will be teaching Intro to Clay, Intermediate Wheel, Intermediate Hand-building and two sections of Functional Pottery, as well as a handful of Independent Study students.

The only class I haven't taught before is Intermediate Hand-building, though I taught an experimental version of it a few years back for a student who was technically registered for Independent Study. One of my most daunting tasks today was putting together a calendar for the various classes. I like to keep a calendar posted in the clay studio so that students know what to expect for lectures, demos or due dates on a given day. It also helps me keep track of which classes are doing what on which days. Especially with two sections of the same class and two sections of overlapping classes, it helps me to not forget a demonstration or assignment. 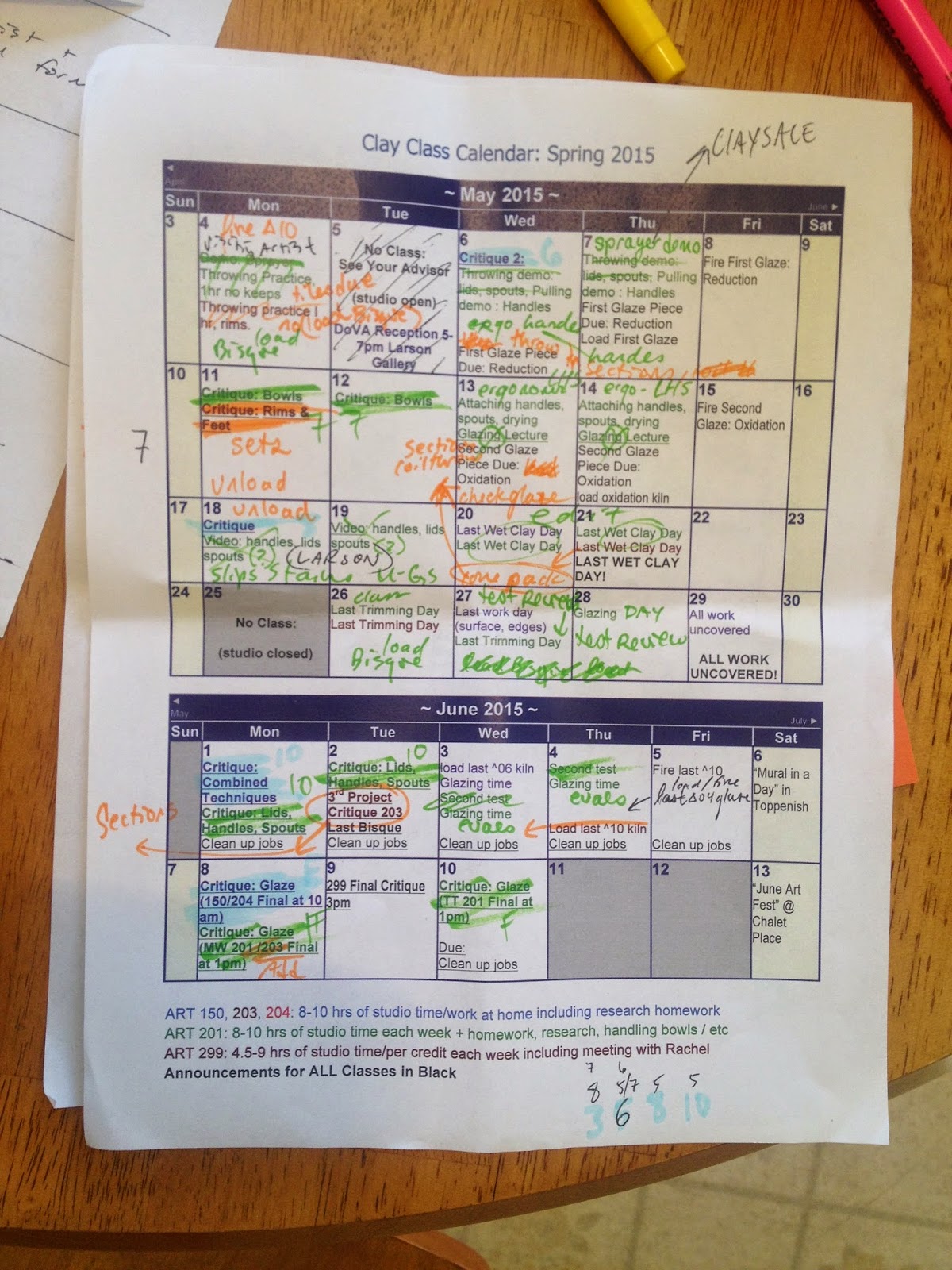 Usually I can just recreate the previous quarter or year's calendar, but this spring's schedule has a few extra surprises I need to factor in. I have the new hand-building class and I'm going to miss a few days for various things, but I want to make some changes to my Intro to Clay class schedule. The class is relatively new (this will be the third time I've taught it) and though I was generally pleased with the class last fall, I didn't feel that the students had enough time on the wheel.

Additionally, with the Intermediate Hand-building class meeting at the same time, I need to leave enough time for introductions, demonstrations and discussions with students in both classes. With only 2 hours of class per day, I don't have much room for error if I'm going to cover all the material I wish to cover.

The schedule looks a bit messy in it's current draft, but I'll be revising it tomorrow when I go in to school. My work time today is already almost over, since the kids are on short days for conference week. If you'd like to take Functional Pottery, I still have room in my classes.
Posted by Rachel at 12:02 PM No comments:

This weekend went by pretty fast with family activities and a textbook I'm trying to read for class. I got into the studio for just about two hours total. I did some cleaning, made a plaster mold (that still has to dry before I try it out) and used all the molds I made earlier for almost the first time.

The biggest achievement, I suppose, was vacuuming the studio, but that never looks very exciting. I also used some boxes from my mother-in-law to set up a little raised station for the molds I plan to be using in the near future. Getting that counter space cleared off took some doing, too.


I had mixed up my casting slip pretty well a couple weeks ago, but it had already settled pretty badly. I tried casting with it but mostly made a mess. I probably need to find a funnel and a better way to get the slip remixed; the thick stuff on the bottom of the jar is too deep for my immersion blender.


The press molds worked fine. I need to make a little more slip to go with this type of clay, but that shouldn't take long after I let some of the clay dry.

A week or two ago I had fired a load of my bulbs and the kids' bells. They're waiting for spring break to be glazed and refired. I'm hoping to get a few done before my installation goes up in South Lake Union on March 26 and 27.

A few weeks ago, I visited my daughter's elementary school class to make bells with the kids. The kids are studying salmon and are raising alevin (baby salmon) to later release.

I've done bell projects for two or three years running at another elementary school in town. In that situation, I just show the kids how to make bells. With this class, I had coordinated with the teacher ahead of time and I knew what the kids were studying, so I was able to integrate the lesson with their class a little more carefully.

It made a big difference that this class had roughly 20 kids, whereas the other group has about 75. I brought 3 students from YVCC to help with the project and they were able to station themselves with a group of students to help the kids with their projects.

Apparently one of the student-teachers at the elementary school, who is Native American, brought a type of bell with him to class to show the kids how they traditionally shake bells when they are catching salmon (I think I got that right--it came to me second-hand). So the bell project fit in quite well with their class experience.

I also knew the class had been discussing scientific observation, so I started out their lesson by having them handle wet, dry and fired clay and tell me what they noticed about how it felt. I then had them drop the dry clay in a cup of water and observe what happened (the clay released bubbles of air and eventually fell apart--the clay term is "slaking").

After making observations, we made salmon together (the kids and the teacher had to help me get the right amount of fins in place) and then I led them through the process of making a bell with clay balls inside to rattle.

I took the bells home to fire, then back to school for the kids to paint with watercolor paints. They will shake the bells when they go to release the salmon they've raised.

Though the kids were fairly young, they were all able to build a functioning bell with at least one fish on it. My students helped avoid a few squish-mistakes, but mostly the kids followed along well.


It is always fun to see how the kids approach their bells differently. After the flat bottom and pinch pot top, the kids were able to add fish, drawings, handles and other decorations. It is clear sometimes that a few kids saw each others and put on similar decorations, but there is also a lot of variety in approach. 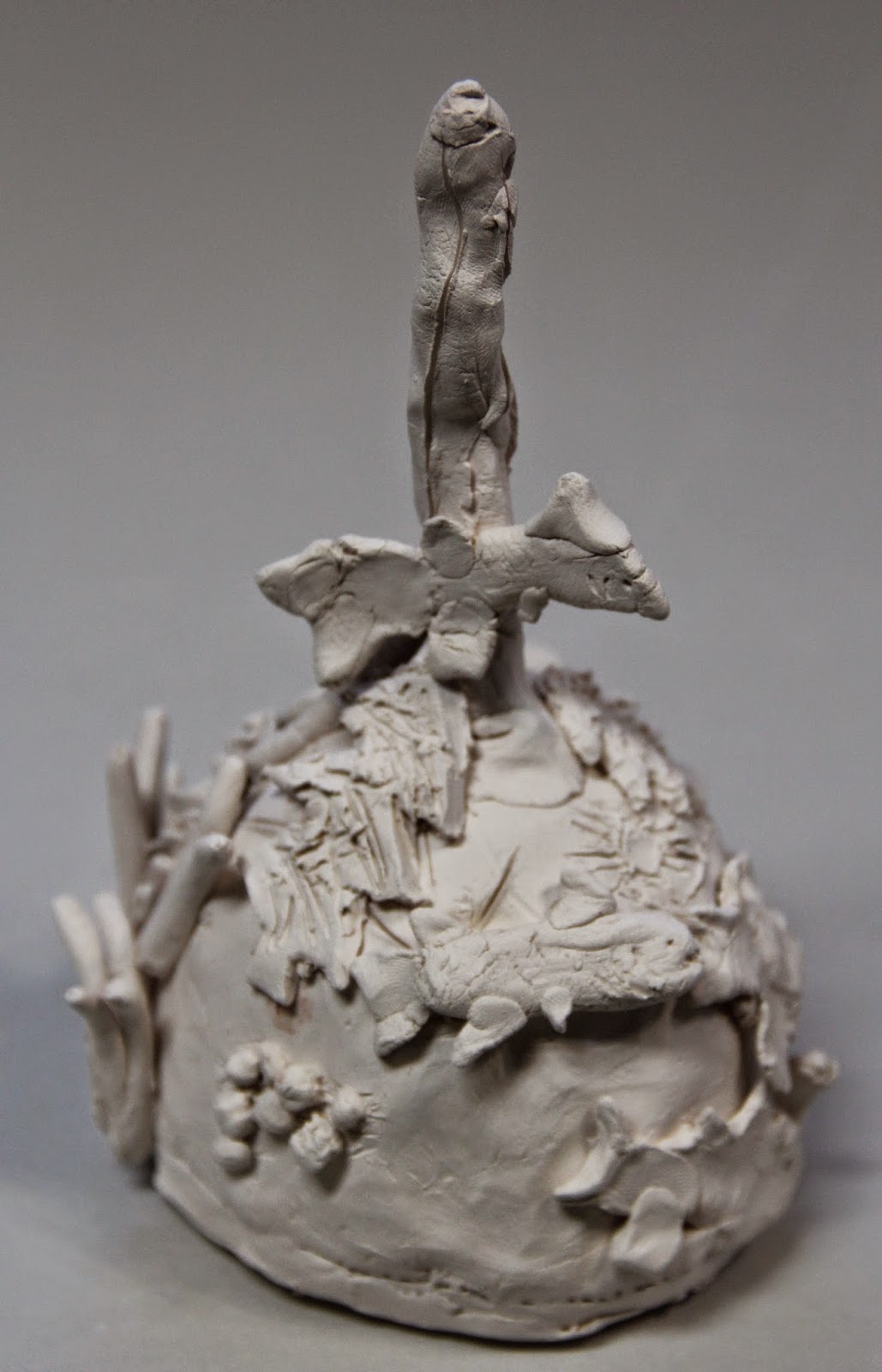 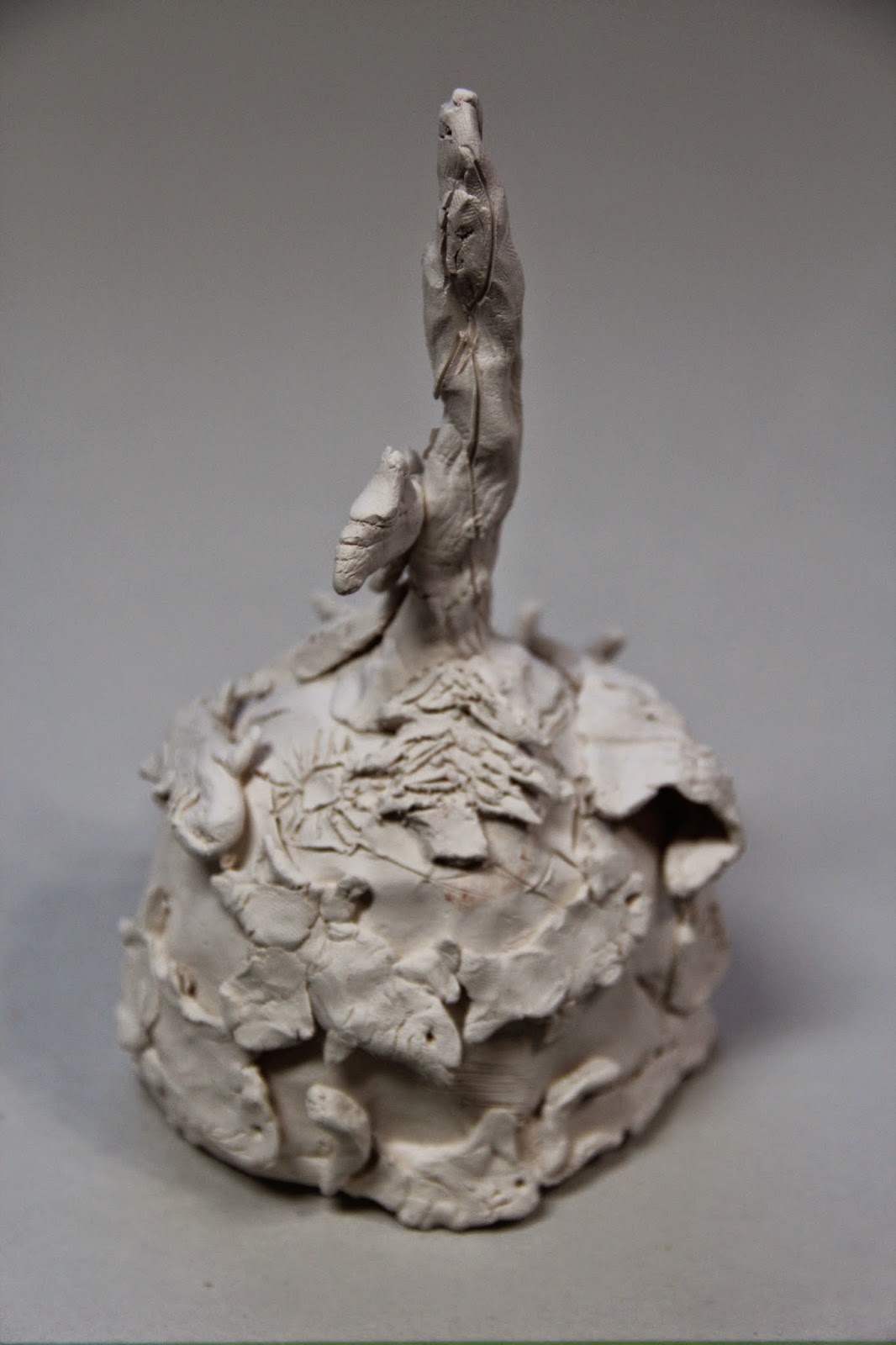 After the lesson, it was also fun to watch the kids clean up. They clearly have a routine and classroom rules. They had no trouble adapting their approach to our tools and the clay mess on their tables. 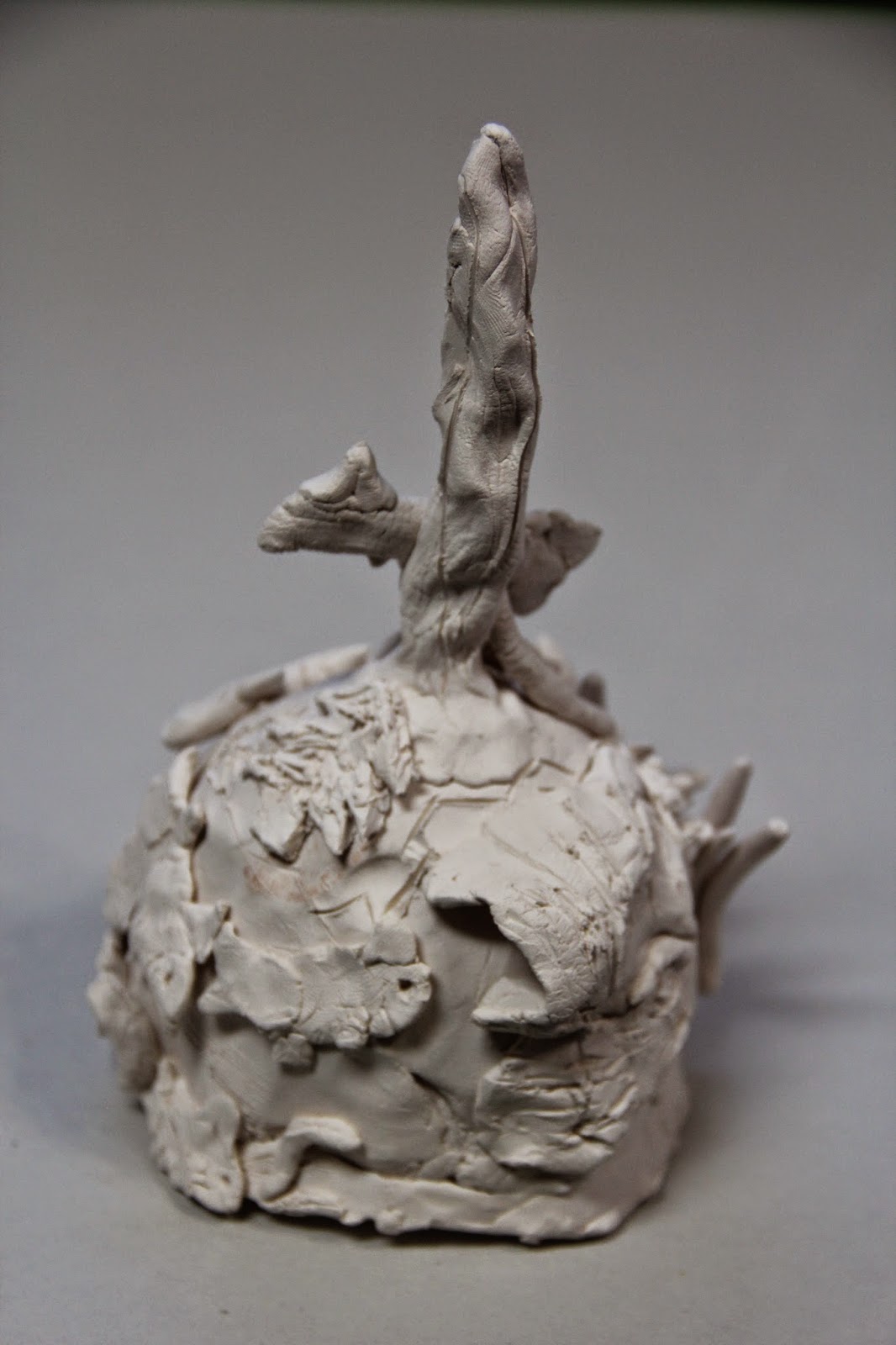 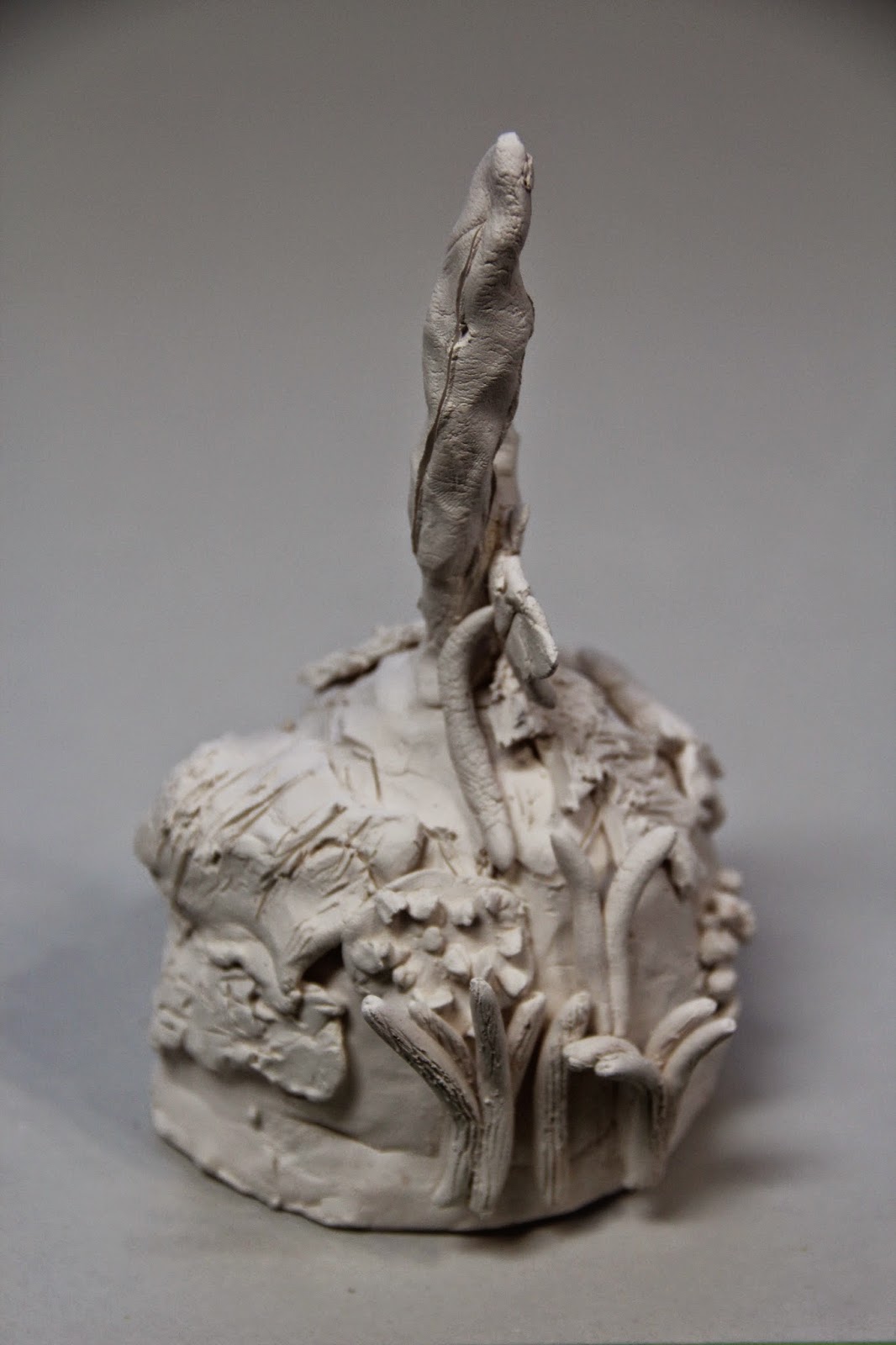 After we got home, I let my daughter continue working on her bell (like I had a choice). She had already included eggs and fish on her bell at school, but the end result includes a waterfall, salmon and alevin and an estuary. Alevin and estuary were her words, not mine.

Posted by Rachel at 9:45 PM No comments:

One Show Down, One Show Coming Up in Seattle

Last weekend I drove to Seattle to take down my show at CORE Gallery in Seattle. I also met with a representative from Shunpike's Storefronts program. I will be installing my next "show" in Seattle later this month. 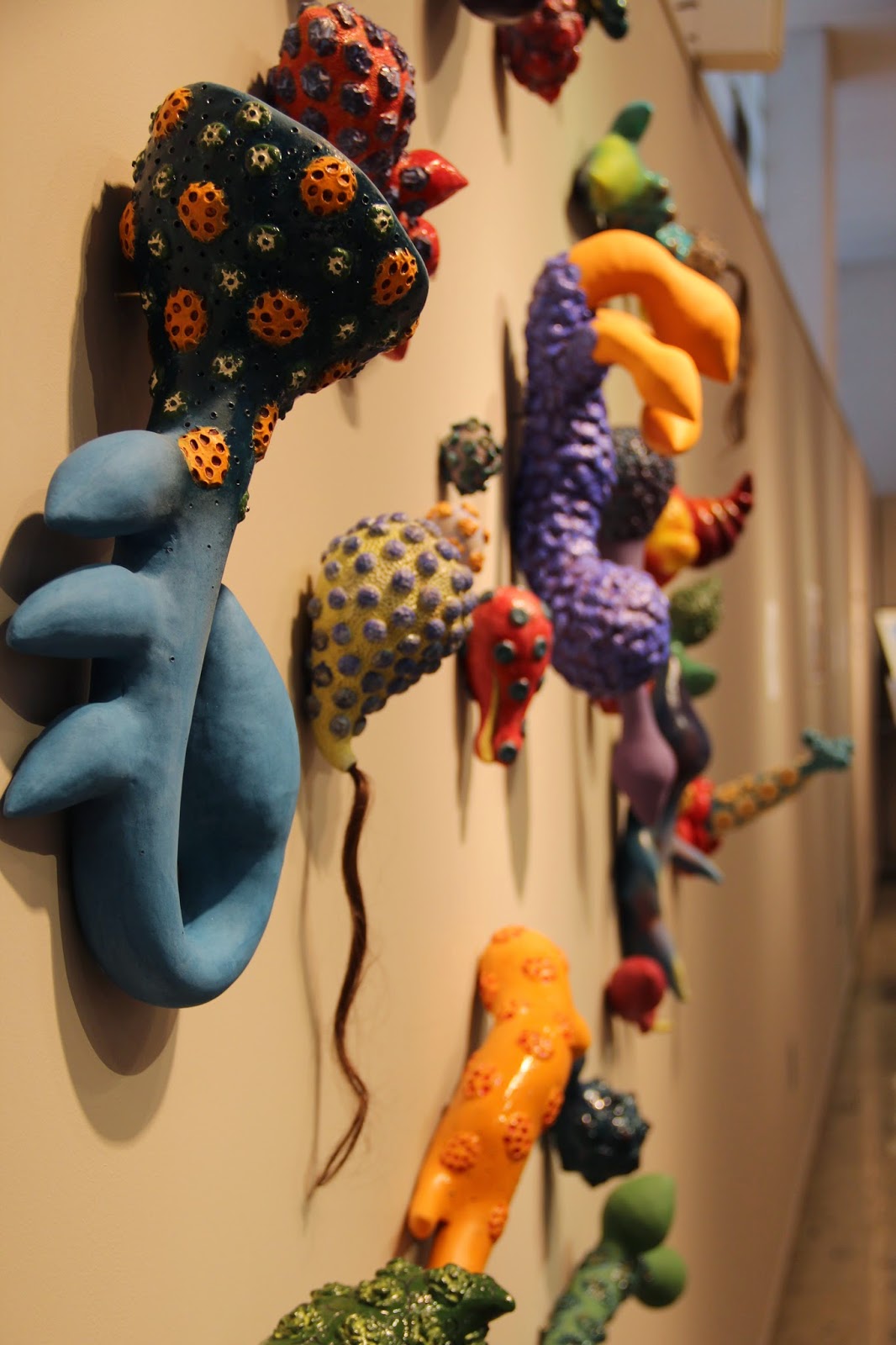 My work will be featured in a storefront on Mercer Street in the South Lake Union area of Seattle. I plan to show a wall installation of my sculpture. I'll install the work at the end of the month and it will be up for three or four months. I'm not sure how long, but I know it will be up in May because there will be a first Thursday art walk in early May. 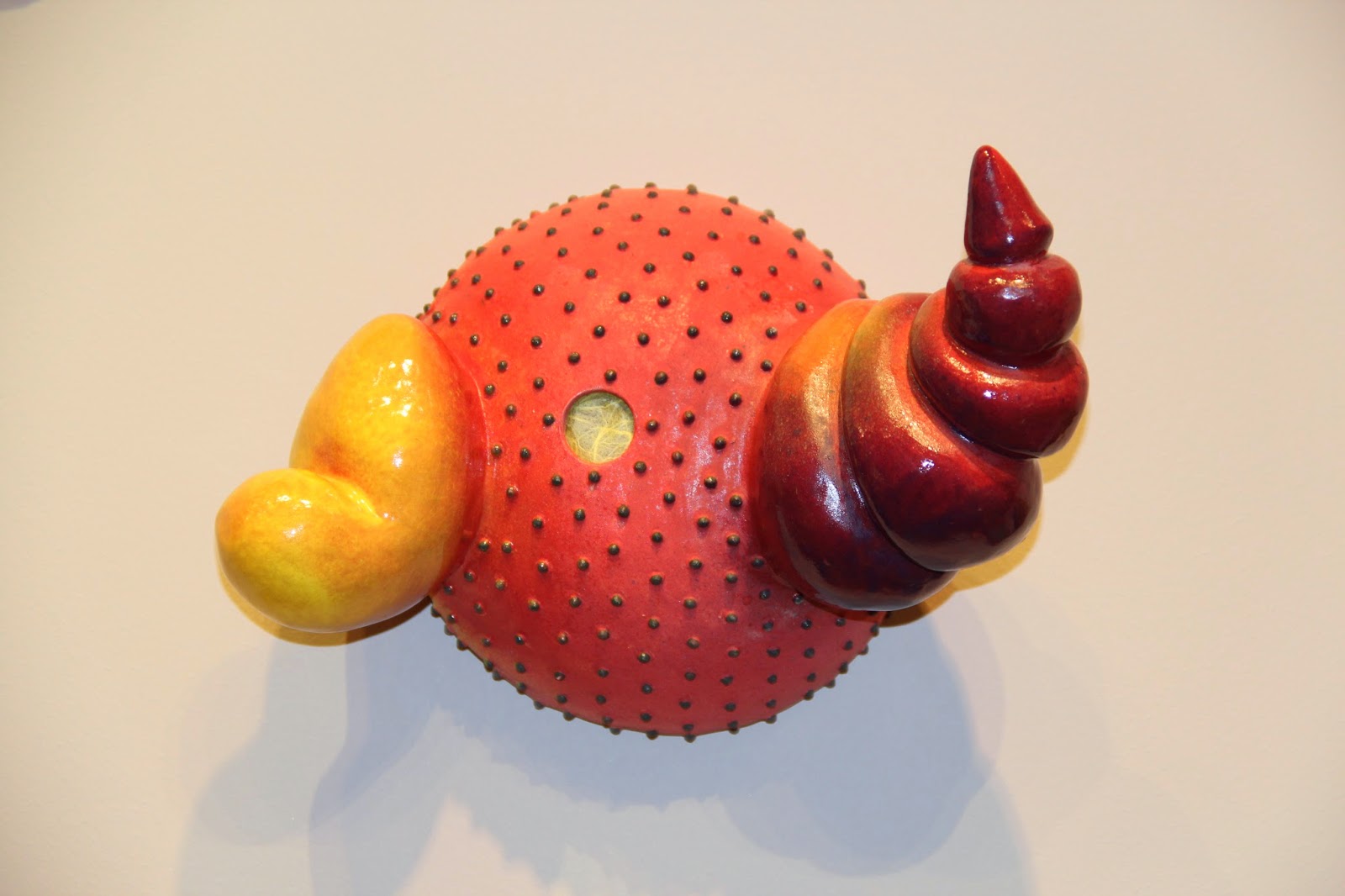 I was hoping to make some new work for the show, but I'm not sure I'll have time at this point. The first week of March (and the last week of February) seem to have slipped by me fairly quickly. 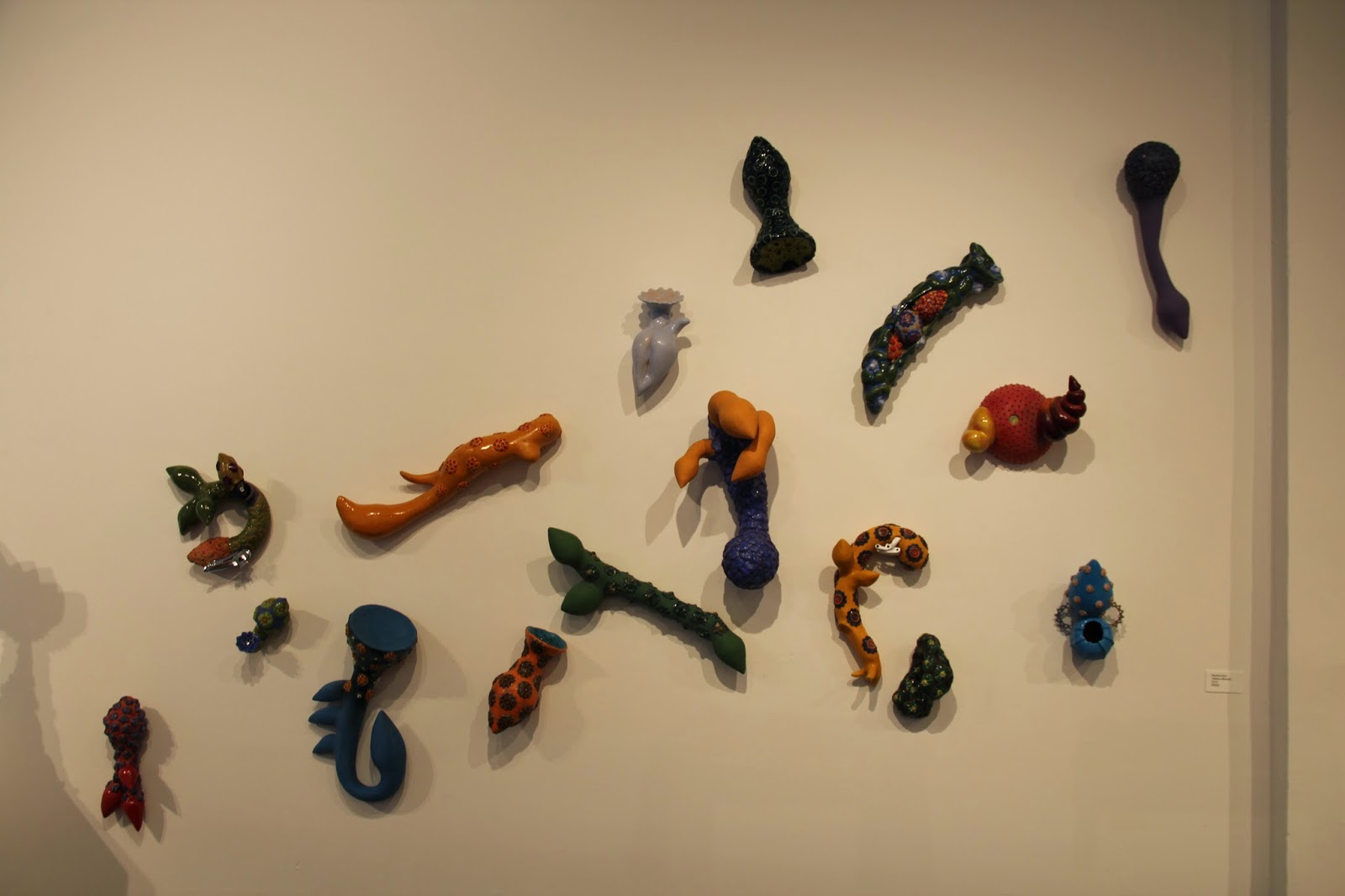