Last week a group of volunteers joined me at school to help put the new YVCC clay studio in order. Despite the fact that we had to spend some time at the old building moving boxes before we could finish in the new space, we made a lot of progress in the new building.

The main classroom has wheel-throwing and hand-building spaces, as well as a teaching station. These seem like the obvious things for a clay studio to contain, but the old studio combined these three functions into the same space as clay storage and mixing, glazing, glaze mixing, and the kilns.

The new studio feels large. It was difficult to capture the sense of space in a small photo, but the wide-angle and panoramic pictures give a better sense of the space. If you are on the YVCC campus in the fall, stop by to admire the space for yourself.

This main room has plenty of space for 17 wheels entirely separate from the six hand-building work tables. There is also space for the slab roller (which hasn't yet made the trip across the street) and the extruder (ditto).

The front area of the main classroom includes sliding whiteboards (ones that don't require me to climb onto the table to use them), storage shelves for my example pieces, and a teaching station with computer, DVD, VHS, and camera.

The projector screen comes down automatically from the ceiling, as does the projector, which is protected from dust behind a hinged ceiling tile. The camera is stationed on the ceiling above the teacher's wheel so that I can show a zoomed-in top or front view on the screen while I am throwing.

There are cabinets, counters, shelves, and sinks all around the main classroom. Right now most of the shelves have display items in them and items are beginning to be sorted for the drawers and lower cabinets. 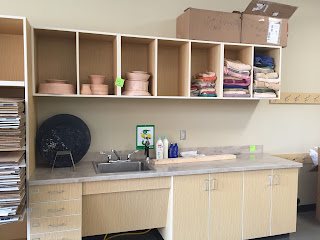 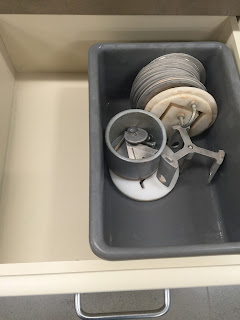 a space for chucks and towels above the sinks; extruder dies in a drawer

In the old space there was one "library" area with three or four shelves for books and magazines. This space also stored chucks, tape, and paper. In the new space most of our magazines and clay books fit easily into three shelves in the main classroom. The glaze books are stored in the glaze room and some technical books can be stored near the kilns. In the main studio there is plenty of space for adding more titles and additional magazines over the coming years. Additionally, students can actually pull out magazines to peruse since the whole bunch isn't wedged in so tightly.

While putting away the magazines, one of my volunteers discovered that we have magazines dating back as far as 1951. I joked that the new space should be able to contain our magazine collection for the next 64 years.

The glaze room is the most exciting thing going right now. In the old studio there was almost no space assigned specifically to glazing. Glazes were kept under a table and pulled out for glazing. The buckets needed to be pushed back after glazing because there wasn't enough room to walk through the classroom with the buckets out. Sometimes students couldn't use certain wheels because the glaze buckets were in that space. When students glazed, they splashed on wheels and were stepping over each other's buckets to each the sink or their work space.

There was one counter with shelves and drawers for storing dry glaze materials. There were also dry materials stored in buckets under several tables and in cupboards and drawers in a variety of locations around the studio. Glaze mixing happened on a counter after students were asked to move their bags and coats. There was no ventilation for the glaze mixing area. Though students wore masks when mixing glaze, the airborne dry glaze materials were not removed from the space as they should have been.

The new studio has a glaze room. This is a long room with shelves, drawers and cabinets as well as work surfaces. The room was designed to be a much more appropriate size for storing our materials, mixing and applying glaze. The room has space to work and I could easily imagine half a class using the space without getting in each other's way.

The best feature of the room, from my perspective, is the venting. The new room has a built-in vent system in the middle of the room that is so quiet you have to pay attention to notice it's on. Last week, when some of my students were transferring materials, we discovered that we can actually see the dust being sucked into the air vent.

For the first time ever, I can see all of our dry materials. We replaced the cracked and breaking, small, white buckets with new blue buckets and lids that fit. Each of these is labeled and arranged alphabetically on shelves in the studio. For several ingredients, we had more than one container in the old studio. Probably this happened when we misplaced the bag of dry material and bought more. Now we have space for all the buckets, as well as the excess, on the shelf. Eventually we should be able to eliminate the excess because we can see what we already have.

The glazes themselves have a new home as well. The new studio has a raised platform for glaze buckets underneath the wall of dry materials shelves. The step means we don't have to lean down as far to reach the buckets. It also means all the glazes can be kept visible and accessible at all times, rather than being pulled out and put away before and after every glazing session.

The class glazes have always been stored in old pickle buckets and scrounged five-gallon buckets from restaurants. We ordered new buckets to match and to because the old ones are also cracking and have issues with the lids not fitting right. I also printed improved labels for each glaze. Unfortunately all the new lids seems to have disappeared. I am hoping the lids show up before the quarter begins.

The drawers in the middle island in the glaze room are meant to store our larger quantities of dry chemicals. In the center of the island, there is a low section where a glaze bucket can go when glaze is being mixed. In this low section the bucket is near the sink and the ventilation and is at an easy height for adding chemicals and mixing the new glaze.


Next to the dry materials shelves and above the glaze buckets, there is storage space for slips, under-glazes, brushes and other glazing tools. The far end of the room has room for the spray booth and a smaller shelving section where I can keep glaze books, raku glazes and glazes for other temperatures than those we usually use in the studio. The advantage of a separate shelving area is that I can visually restrict access to these glazes for students who are not yet familiar with different firing temperatures in the studio.

This room is already miles better than what I had in the previous studio. I have work yet to do in here, but I am excited about showing it off to students and seeing how the improved space impacts our glaze mixing and glaze application processes.

Next to the glazing room, there is a small space for glaze mixing. This space is currently the farthest from complete. We are waiting for the clay mixer to be installed and vented. There are a few items such as the pug mill, still to be put away. This space also houses the washer and dryer and some storage shelves. This room is entirely separate from the other clay studio spaces so that doors can be closed when clay is being mixed. This will help contain both the dust and the noise.

The kiln room, next to the clay room and off the main classroom, is separate and spacious in the new studio. In the old studio, kilns were vented for safety, but the heat was contained in the main studio. The kilns were installed in the same area as the pug mill and rolling ware shelves on the side of the room opposite the wheels.

The kiln room now contains two electric kilns and a test kiln as well as the glass kiln. The biggest advantage of the new kiln room is that the heat and noise of the kilns should be kept separate from the rest of the studio, allowing us to regulate the main studio temperature. I look forward to teaching in May and June in a studio that is not sweltering. Though the kilns were part of the way we kept the studio warm during the winter, I suspect the new building has a more well-regulated heating system than the old building.

In the kiln room there is plenty of room for rolling ware carts and a built in cabinet for kiln furniture (shelves, stilts, posts, etc). From the kiln room there is an exterior exit as well as an exit to a small contained kiln yard for the raku and pit kilns. The raku kiln needs to be rebuilt before it can be used. it is possible that it will not be ready until later in the year.