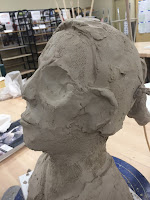 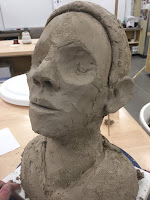 Last week I spend three days on videos for flipping my hand-building class. I demonstrated a whole range of things, from rolling slabs, using the extruder, and using coils to glazing and clean up.

Several of the videos I did for my flipped class video project showed the process of building a human bust on an armature. For the videos, I demonstrated all the steps starting with showing some armatures and explaining how to set them up.


In separate videos, I demonstrated how to build up the thickness of clay on the armature; how to shape the head, neck, and chin; how to plan for the position of the eyes, ears, and mouth; how to make a reasonably convincing eye and add lips and ears; and how easy it is to adjust incorrect positioning and size.

On the second day, after he bust had dried some, I demonstrated keying and cutting the bust apart; hollowing out and measuring the wall thickness; and on the last day, putting the pieces back together and repairing the seams.

This is always a tricky demonstration to do during class because it requires timing and requires me to work ahead of the students. I need to build wet, but then the piece needs to dry to about leather-hard on the outside before cutting. The interior is still wet, so it can be scooped out. It takes some time to scoop out all the wet insides and then the piece needs to be put back together.

For the demonstration piece, I built up the armature the day before the first video, then set up a second armature for the first video and started on that one. But after the first video ended, I switched to my prepared armature to save time. The next video showed shaping the head and face. Then, with the camera off I did some more shaping between videos. I let the bust dry between day one and day two.

On the second day I cut apart the head and thinned out the top section and ponytail, but carved out the rest of the bust off camera. It took me most of the afternoon to finish carving out the bust and put the bottom sections back together.

I saved the top section and ponytail to put back together in the last two videos. In the videos I talked about how to clean up the seams and demonstrated on one or two, but I spend another hour on Thursday actually cleaning up all the seams.

It was important to do my own videos of this whole process because I wasn't able to find what I needed online. The demonstration videos that I've been able to find online don't start simply enough for a beginning class and don't talk enough about drying, measuring thickness, and putting the whole thing back together.


I haven't viewed my completed video demonstrations yet, but I think each was probably in the 5-10 minute range and there were about 8 videos total for this process.


That's a lot to watch in one sitting, but the length of the videos means that students can break those up and watch them one at a time and when they are ready for them. They can also rewatch, slow down, stop, or skip to the sections they need, unlike with a live lecture where the clay might dry too much or not enough to show a particular technique or part of the process again later.


I enjoyed building the bust, but I was torn between wanting to get the thing done and wanting it to look good. I compromised a bit, not just because of time, but because I'd like to keep the bust in the studio as an example. 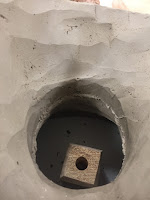 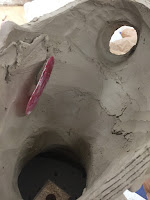 the inner seam of the neck, before and after smoothing

I know from experience, if the finished work looks too good, it sometimes wanders away. Luckily this one will be big and awkward to carry.


The last solid built form I made (start to finish, usually my demos are not completed because of time) for the studio was a small Maneki Neko (lucky cat) and it hasn't been seen in several years. I suspect it was too cute and now lives with some previous clay student with sticky fingers.